Indian captain Virat Kohli was slapped with one demerit point for making 'inappropriate contact' with an opponent during India's nine-wicket loss to South Africa on Sunday at Bengaluru.

Kohli was penalized after he made shoulder contact with South African fast bowler Beuran Hendricks while taking a run in the game that India lost quite badly after surprisingly electing to bat first. Kohli himself scored only 9 from 15 in the match. 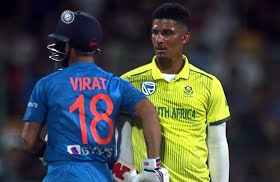 Kohli was given one demerit point after his behavior towards an umpire was found inappropriate during the Centurion Test against South Africa in January 2018. The second demerit point was given to him for excessive appealing during this year's World Cup match against Afghanistan.

As per ICC rules, if a cricketer gets four demerit points during a 24-month span, he can be banned either for one Test or two limited-overs matches. After the 24-month period, the demerit points lapse, and a new circle begins.

As such, Kohli has to be careful not to earn another demerit point before January 2020, when he completes his two year period.

India and South Africa shared the T20 series 1-1 and will now lock horns in the three-match Test series starting on October 2.