We had a nail biter in Dubai as Delhi Capitals managed to somehow get over the line in their first match against the Kings XI Punjab. Stoinis starred with both bat and ball in the last overs of both of the innings and a magnificent 89 by Mayank Agarwal went in vain as Delhi registered their first points of the season.

Put in to bat after losing the toss, Delhi made a horror start to their innings. Shikhar Dhawan carelessly strolled down the pitch to fetch a non existent run, as a result of which he was run out. Shaw and Hetmyer both tried to hit their way out of the trouble caused by the pacy Shami, but both fell cheaply to him. At 13-3, Delhi were desperately in need of some stability, and that came from their skipper Shreyas Iyer and star batsman Rishabh Pant. Pant curbed his natural instincts and batted according to the situation. 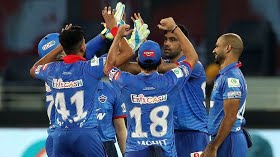 Somewhere around the halfway mark, Iyer took a particular liking to the office Gowtham and smoked him for three big sixes downtown. Trying to increase the scoring rate, both the batsmen got out and that triggered a mini collapse. Having lost 6 wickets for 96 runs with just four overs remaining, Delhi would have hoped for a target around the 130 mark. But then came the Stoinis storm, and turned the match on its head. He put Chris Jordan under pressure and scored 36 runs of his 9 deliveries. Delhi finished with a respectable 157 as Stoinis cracked a fifty of just 20 balls.

Chasing a gettable 158, KXIP made a decent start to their innings with skipper KL Rahul and Mayank Agarwal batting responsibly. Soon after, Mohit Sharma broke through the defences of Rahul with an inswinger and that opened the gates for DC bowlers.

Former Punjab captain Ashwin picked up Karun Nair and Nicholas Pooran in his very first over for the Capitals but unfortunately injured his left shoulder and was ruled out of the remainder of the match. With three wickets down, and the required rate still under 9, the need of the hour was to bat sensibly, but Maxwell played an irresponsible shot to gift his wicket to Rabada.

Sarfaraz and Gowtham lost their wickets while trying to up the ante after a few quiet overs. Mayank Agarwal, on the other hand, mixed caution with aggression and was slowly scripting a masterclass. With 42 required of the last 3 overs and Punjab six down, the game seemed to be over for Punjab. But Agarwal had other ideas. He scored a couple of sixes of Mohit Sharma to bring back some hopes of a comeback. And soon those hopes of a comeback became reality as Agarwal scored 12 of the Rabada over and 12 of the first 3 deliveries of Stoinis in the last over. With 1 run required of the last 3 balls, Agarwal had all but sealed the game for his side. But we were in for more drama as Stoinis, probably playing the match of his dreams, picked up Agarwal and Jordan both of the last two balls of the match to set up a super over finish to the match !

Batting first, Punjab decided to come out with skipper KL Rahul and Pooran as they decided to rest the obviously tired Mayank Agarwal. But Rabada made sure they didn’t stay for all six deliveries as he picked up Rahul with a bouncer and castled Pooran with a quick full length delivery to have the target of just 3 runs from 6 balls.

Shami bowled the super over for Punjab and gave away a wide with his second delivery. Pant, who was accompanying his skipper, made light work of the target by picking an easy two of the third ball of the over to have a rather anticlimactic end to an intensely well fought humdinger of a match.