The 2002 England tour was a crucial series for Rahul Dravid in the sense that he rose is stature even more as a complete Test cricketer following this series.

Dravid at his sublime best (September 2002)

The 2002 England tour was a crucial series for Rahul Dravid in the sense that he rose is stature even more as a complete Test cricketer following this series. Before that as well, he had established himself as one of the best in the world, but this series in question was something different, and the 217 he made at the Kennington Oval, in London had a lot to do with the same. The Test series was tied at 1-1 going into the fourth and final Test, and neither team could afford to slip at that point. Dravid ensured that India did not, as the series ended in a high-scoring draw. 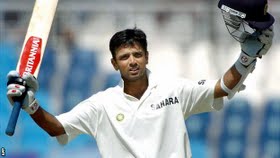 As always, it was a highly challenging situation that brought out the best in Dravid. England, batting first, had amassed 515. In reply, India lost Virender Sehwag early, and the other makeshift opener, Sanjay Bangar, also felt with the score on 87. An Indian collapse from there could very well have led to a series defeat for India. However, Dravid had other plans. He held up one end, even as the middle and lower order batsmen played around him. In one of Test cricket’s epic knocks, Dravid held fort for 629 minutes, facing 468 deliveries in a knock that included as many as 28 hits to the fence.

The English bowlers had no answer to Dravid’s resilience. Matthew Hoggard, Ashley Giles, Dominic Cork and Alex Tudor tried their best to dislodge‘The Great Indian Wall’ but to no avail. Dravid not only defended the good deliveries but, as his innings progressed, also ensured that the runs kept coming via one and twos as well as boundaries at regular interval. He just did not look like getting out, so it wasn’t surprising that it needed a run-out for England to get rid of Dravid. By the time he was dismissed at the score of 473, India were well out of trouble.

Other impressive performances during the Test

England’s first innings score of 515 was scored thanks in main to opener Michael Vaughan’s strokeful 195 aided by half-centuries by Marcus Trescothick, Mark Butcher and Dominic Cork. As for their bowlers, Andrew Caddick picked up four wickets and Giles snared two. For India, Dravid was well supported by fifties from Sachin Tendulkar and Sourav Ganguly while VVS Laxman made 40 and Ajit Agarkar a handy 31. Harbhajan Singh was the star performer for India with the ball, grabbing a five-for in England’s first innings.

The India number three faced England in 21 Tests, scoring 1950 runs at a brilliant average of a shade over 60. His runs included seven hundreds. A highly impressive aspect of Dravid’s performance against England was that six of his seven hundreds came in England, under trying circumstances, where he averaged 68.80 in 13 Tests. There was never and there will never be another Dravid.