Mahela Jayawardene's unbeaten 72 saw Sri Lanka to a crushing nine-wicket victory against England in the lone Twenty20 international on Saturday. 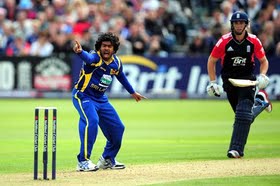 Mahela Jayawardene's unbeaten 72 saw Sri Lanka to a crushing nine-wicket victory against England in the lone Twenty20 international on Saturday. Jayawardene's innings backed up an impressive bowling display that left the tourists needing just 137 for victory against World Twenty20 champions England. They reached their target for the loss of only veteran Sanath Jayasuriya with 16 balls to spare.

The result meant Stuart Broad's first match as England's Twenty20 captain ended in a defeat where he was run out for nought and took none for 29, while Sri Lanka skipper Thilina Kandamby won his opening match in charge.

England may have won the recent three-match Test series between the two countries 1-0 but this was a second successive crushing limited overs defeat by Sri Lanka after the 10-wicket World Cup quarter-final loss in Colombo in March.

Kumar Sangakkara, like Jayawardene a former Sri Lanka captain, was 43 not out after the experienced pair shared an unbroken second-wicket stand of 97.

Jayawardene and Jayasuriya, in his penultimate match before international retirement, previously put on 40 for the first wicket. Right-hander Jayawardene, proving again there is a place for classical elegance in cricket's shortest format, completed a 40-ball fifty with a six and four fours.

He was severe on seamer Chris Woakes cutting a full toss for four, next ball driving him over his head for six and, the ball after that, clipping him down to third man for another boundary.

Surrey seamer Jade Dernbach marked his international debut by dismissing Jayasuriya for eight but that was as good as it got in the field for England.

Earlier, Sri Lanka fast bowler Lasith Malinga took two for 15 and left-arm spinner Jayasuriya two for 18 as England struggled to 136 for nine after Kandamby won the toss in overcast conditions.

Eoin Morgan (47) and Kevin Pietersen (41) put on 83 in 54 balls for the third wicket after England had been faltering at 12 for two. But they both fell in quick succession to leave England 101 for four in the 13th over and no other batsman scored more than Ravi Bopara's 19.

Jayasuriya, playing his first international match for two years after reported political pressure led to his 'farewell' recall, struck with his fifth delivery when Pietersen, backing away to leg, was bowled by a quicker ball.

And the under-rated bowler dismissed Bopara in similar fashion as England, who left out in-form batsman Ian Bell, saw their innings fall away. England and Sri Lanka meet again in the first of five one-day internationals at The Oval on Tuesday.