They may have lost the opportunity of claiming the number one ODI spot due to the abandonment at Edgbaston, but England still have a lot to play for in the remainder of the two games.

They may have lost the opportunity of claiming the number one ODI spot due to the abandonment at Edgbaston, but England still have a lot to play for in the remainder of the two games. Rarely have England dominated Australia in a one-day series in the manner they have done here. Even when they won the Ashes in 2009, they were hammered 6-1 in the subsequent one-day tournament. A win at Chester-le-Street will take them a step closer to 4-0, and that should be enough to inspire them on to another credible performance. The fact that Australia cannot win the series from here will also reduce the pressure on the home team, but they must not take the foot off the pedal.

Among the crucial factors that have given England the upper hand in the series has been their batting at the top of the order as well as their bowling at the start of the innings. Australia just haven’t found a way to break though as yet. Ian Bell and Alastiar Cook have given the side excellent starts, which means there has been little pressure on Eoin Morgan, Ravi Bopara and co. To their credit both Morgan and Bopara have batted very efficiently in the series so far, but if Australia can somehow eke out Bell, Cook and Trott early, the middle-order could still be seriously tested. For such a situation to arise either Brett Lee or Ben Hilfenhaus, if he plays, must come up with a fiery burst. 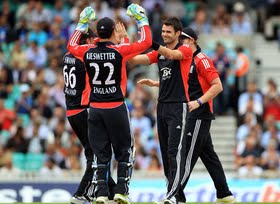 As for England’s bowling, James Anderson is all set to return, which means there is likely to be no respite for Australia. The Aussie batting line-up has struggled to cope with the movement of Anderson and the pace of Steven Finn. This is one of the chief reasons why they found themselves on the back foot in both the earlier games. If Anderson-Finn continue to dominate, it is difficult to see Australia making a comeback. If the Aussies are to break the monopoly, they will heavily depend on David Warner to fire. If the left-hander cracks off to a start, English bowling could be put under pressure.

The one thing is favour of Australia will be the absence of Graeme Swann. Australia have clearly struggled to get the quality off-spinner away in the series, and would be relieved not to have him in the opposing camp. In Swann’s absence, the underperforming Australian middle-order will have it somewhat easier. Still, the visitors have to come up with a highly convincing effort on Saturday to stay alive in the series.