Not out of ODI series yet, maintains Kagiso Rabada

South Africa pace bowler Kagiso Rabada feels despite being 0-2 down in the a six-match series, the hosts can still make a comeback.

South Africa pace bowler Kagiso Rabada feels despite being 0-2 down in the a six-match series, the hosts can still make a comeback.

"It is very important we keep speaking the right language. Anything can happen in sport. We need to get as much momentum as we can. We are definitely not out of it,” he added. 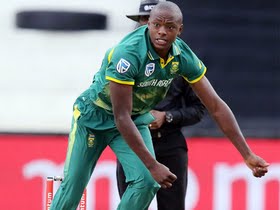 South Africa have struggled against the wrist spin of Yuzvendra Chahal and Kuldeep Yadav. Admitting that things haven’t gone according to plan, Rabada added, "We clearly haven't come to the party. It's not acceptable at all. India are a strong team. They've just beaten Australia comprehensively. I know they've been playing all their games at home, but they've been playing good cricket.

"It doesn't help that we have been going through a few changes and not been in the best of form since the Champions Trophy in one-day cricket. We are still trying to catch up at the moment. Hopefully it comes pretty soon, said Rabada in the NDTV report.