After Kohli, its time for Ishant Sharma to show his middle finger!

Ishant Sharma caught on camera showing his middle finger to an Aussie fan in Perth.

Just a few day’s after Virat Kohli’s obscene gesture in the Sydney Test, lanky pacer Ishant Sharma is reported to have done the wrong act in Perth! The incident happened when the Indian team decided to have some fun away from cricket by visiting a go-karting venue in Belmont, Perth last night. 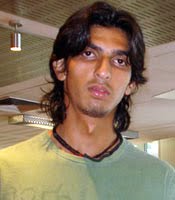 It has been reported in an Australian newspaper that a fan had commented on Ishant in a satirical tone saying - "Why don't you go learn how to bat and bowl before you go go-karting. It will be three-nil mate.'" Ishant who didn’t take it in good terms replied with a middle finger gesture which got captured by a press photographer.

India is scheduled to start its training for the Third Test at Perth only from today. The last three days after losing the Second Test at Sydney, Team India has been away from Cricket which has been widely criticized by the Indian media back home.