India clinched a 11-run win in the Second T20I at Ahmedabad thanks to a powerful batting display. Yuvraj Singh starred in the Indian victory with a dazzling knock of 72 from 36 balls with 4 fours and 7 sixes.

India clinched a 11-run win in the Second T20I at Ahmedabad thanks to a powerful batting display. Yuvraj Singh starred in the Indian victory with a dazzling knock of 72 from 36 balls with 4 fours and 7 sixes. Skipper MS Dhoni played his hand with a 23-ball 33. The opening batsmen Gautam Gambhir (28 from 11 balls with 4 fours) and Ajinkya Rahane (28 from 26 balls) once again provided a sparkling start and with the middle order firing unlike in Bangalore, India posted a strong total of 192 for 5.

It wasn’t all rosy for the Indian batsmen as there were periods when the Pakistani bowlers had the better of them. Mohamamd Irfan was again impressive with his pace and bounce, though he went wicketless in his 4 overs for 20 runs. Umar Gul took 4 for 37 while bowling a very good last over. Saeed Ajmal for once was smashed around, being hit for three consecutive sixes by Yuvraj. 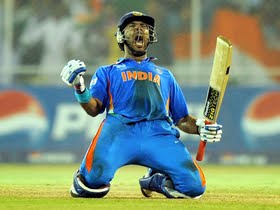 Pakistan threatened to chase down the Indian target of 193 with its opening batsmen – Nasir Jamshed (41 from 32 balls with 4 fours and a six) and Ahmed Shehzad (31 from 29 balls with 3 fours and a six). Despite a strong position of 74 for 1 in the 10th over, Pakistan still had plenty to do each and every over because of the huge target. The in-form Skipper Mohammad Hafeez played a sublime knock of 55 from 26 balls with 6 fours and 3 sixes which threatened to take the game away from the Indians. The hosts prevailed towards the end with wickets falling in the pursuit of the big shots.

Ashok Dinda had the Midas touch taking three key wickets for the homeside in the climax. Ishant Sharma held his nerve well when it mattered and R Ashwin bowled well for his 1 for 28 in 4 overs. Yuvraj Singh who chipped in with the important wicket of Ahmed Shehzad along with his blinder of a knock got the Man of the Match award.

Toss and Teams: Pakistan has won the toss again and they have asked India to bat first in the Second and Final T20I at the Sardar Patel Stadium in Motera, Ahmedabad. The visitors who had won the first T20I at Bangalore have retained the same playing XI. India have made just the one change with R Ashwin coming in for Ravindra Jadeja.