Shami hits out at Bumrah critics, says ‘some have a job to comment and earn money’

Senior Indian pacer Mohammed Shami has backed out-of-form fast bowler Jasprit Bumrah, stating that it is wrong to criticize a player after just two or three poor performances. Bumrah has come under the scanner after going wicketless in the three-match ODI series against New Zealand, which the visitors lost 3-0.

Speaking after the second day of the warm-up game against New Zealand XI at Hamilton, Shami questioned the critics, "How can people forget Jasprit Bumrah's numerous match-winning performances just after a couple of indifferent ODI games? I can understand we are discussing a topic (after a period of time) not just after 2-4 games. Just because he hasn't performed in two games, you can't just ignore his ability to win matches.”

Shami, along with Bumrah, Umesh Yadav and Navdeep Saini, impressed on the second day of the tour game. While Shami claimed 3 for 17, Bumrah, Umesh and Saini shared two scalps apiece. Praising 26-year-old Bumrah’s match-winning efforts, Shami added, "What Bumrah has achieved for India, how can you even forget that or for that matter ignore it? So if you think positively, then it's good for the player and his confidence also.” 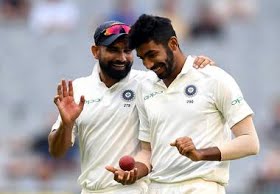 The Indian speedster, who has 175 Test wickets and 144 in ODIs, did not miss the opportunity to take a dig at critics. "As a sportsman, it's very different. From outside, it is very easy to nitpick as some have a job to comment and earn money. Every sportsman can get injured and one should try and look at the positives rather than harp on negatives. I also got injured in 2015 but then bounced back," Shami further went on to add.

Shami is surprised at the barrage of criticism being hurled at Bumrah but opined that they cricketers shouldn’t read too much into it. "People tend to think very differently and when you do not do well for a few games, their viewpoint about your changes. So on our part, we shouldn't over-think," he asserted.

The 29-year-old, now a senior statesman in the team, said he is happy to help upcoming bowlers like Navdeep Saini, and added that experience makes a lot of difference. “Experience matters as you then don't panic easily. You have faced different situations and know what to do. That is valuable. So when an experienced player is around and you bring a youngster, he matures quickly. So in our team, we guide our youngsters, joke and laugh with them, make them feel comfortable so that they don't feel that there is a distance between seniors and juniors," stated Shami.

He also went on to praise Saini who, he hopes, gets better with time. “He is young, he has got talent, pace, and height. So there are benefits. But yes, someone has to guide him and take him along the way. He needs support. He is bowling well but no one possesses experience straightaway. It comes with the passage of time. Hopefully, it will come soon and we seniors are there to help him," India’s bowling match-winner added.

Shami also expressed happiness with the track on offer for the practice game against New Zealand XI. "It was a bit green and the wicket was damp on the first day compared to the second day. Yesterday morning, it was challenging and we wanted to take up that challenge. Today, it was drier compared to yesterday, with cloud cover, the conditions became helpful. There was good bounce and carry, so felt good bowling on a track. These kinds of tracks are a rarity and since we have pacers of that caliber, we reaped its benefits," he explained.

India kick-off the two-match Test series with the first one to be played at Basin Reserve in Wellington from February 21.