That the third ODI between Australia and Sri Lanka at Brisbane was dominated by bowlers would be an understatement. Sixteen wickets fell on the day, the entire match lasted less than 50 overs and the total match aggregate did not even cross 150.

That the third ODI between Australia and Sri Lanka at Brisbane was dominated by bowlers would be an understatement. Sixteen wickets fell on the day, the entire match lasted less than 50 overs and the total match aggregate did not even cross 150. Even if one keeps the exceedingly bowler friendly conditions in mind, it has to be said that the Sri Lankan bowlers came up with a near perfect performance on the day. It would have been very easy for the bowlers from the visiting side to get carried away, more so considering that their pacemen do not encounter such helpful surfaces back home. 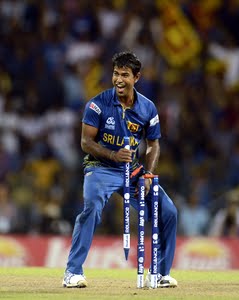 Right from the very start, the Sri Lanka bowlers were on target. Nuwan Kulasekara, in particular, was brilliant. He got the ball to talk in a manner that he had never done before, and the Aussie batsmen, for a change, had no answer to his moving beauties. Phillip Hughes, who began the series with a bang, registering a century on debut, was nipped out by an unplayable away-going snorter from the medium pacer. The rest of the batting line-up found it equally difficult to deal with the little Sri Lankan’s testing deliveries. Michael Clarke, George Bailey, David Hussey and Moises Henriques – be it the experienced guns or the fresh talents, they all were victims of Kulasekara’s genius.

What also worked in Lanka’s favour was that Kulasekara got some excellent support from the other pace bowlers in the side. Angelo Mathews sent down only four overs, but was instrumental in getting the side off to a confident start, sending back the dangerous David Warner early on, and from there on there was no looking back for the visiting side. Lasith Malinga also took the opportunity to put the Aussies under further trouble. His wicket-taking spell ensured that there was no late-order fight back from Australia. Malinga sent back big names like Matthew Wade and Mitchell Johnson.

Following the collapseserious questions would be raised over Australia’s rotation policy, as a result of which Warner, Clarke and Wade had to sit out of the first two games. But while the trio did seem a bit rusty, the rest were also equally off-colour and as such the Aussie policy of giving periodic rest to key players cannot be viewed as an excuse for the debacle at Brisbane. It must be remembered that they won the first game minus the big names.

A fair assessment of Australia’s performance in the match would be that they weren’t good enough to deal with the challenge posed in front of them by the Lankan pace bowlers. Also, the conditions were far more helpful for pacers in comparison to some other pitches in the country. That even the Australian bowlers grabbed six Sri Lankan wickets in reply was indicative of how much the surface was assisting the faster men. In a rarest of rare occurrence, Lanka now find themselves 2-1 ahead in the five-match series in Australia. The bigger challenge for them will be to continue the good work.