Can New Zealand at least put up a fight?

The Cape Town Test was nothing short of a nightmare for New Zealand. They were bowled out for 45 on the opening day of the Test and from there only one team was going to win the match, despite an improved performance from the Kiwis’ batsmen in the second innings.

The Cape Town Test was nothing short of a nightmare for New Zealand. They were bowled out for 45 on the opening day of the Test and from there only one team was going to win the match, despite an improved performance from the Kiwis’ batsmen in the second innings. The betterment however wasn’t good enough for them to take the game beyond the third day. They needed a miraculous effort to save the Test after the opening day embarrassment. South Africa were too good a side to lose from such an impregnable position though.

Given the current state of affairs, expecting New Zealand to make an extraordinary comeback would be going too far. Yes, in recent times, they have recovered marvelously from huge defeats to upset Australia and Sri Lanka. At the same time, South Africa are a much stronger outfit and are highly unlikely to give the struggling New Zealand outfit even a foot in the door. After all, it has been an extremely arduous task from them to get to the top, and they had shown in the tightly-contested series against Australia, that beating them would take a herculean effort. 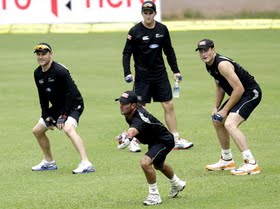 What New Zealand must look to do at Port Elizabeth is try and perform to their best of their ability. If they are seeking some good news one is definitely that their wrecker in chief in the opening Test, Vernon Philader, has been ruled out of the second Test due to injury. The Proteas still possess a formidable bowling outfit with Rory Kleinveldt joining Dale Steyn and Morne Morkel. With the pacers doing all the damage at Cape Town, Robin Peterson did not have a lot to do. If the New Zealanders can keep the faster men at bay, they could find some relief in the form of Peterson, who isn’t a great turner of the cricket ball.

Even in the disaster during the first Test, there were some positives for the Kiws. Dean Brownlie slammed a wonderfully attacking hundred in the second innings while skipper Brendon McCullum and BJ Watling also spend some precious time at the crease. With the ball, Trent Boult and Chris Martin picked up a few wickets to give New Zealand some reason to cheer. They need a much better all-round effort from their batsmen as well as their bowlers if they are to run South Africa close.

Although New Zealand aren’t as talented as they were a few years ago, they do have some men who can stand up to the South Africans. First and foremost, the captain McCullum must lead from the front and score some big runs. This is even more crucial since their best batsman and ex-skipper Ross Taylor is not on the tour. Then, the Kiwis also have Martin Guptill and Kane Williamson, who are talented in their own right. Can New Zealand put together a fight similar to the effort they came up with against Australia and Sri Lanka under likewise circumstances?