Australia Squad for T20Is against India

Australia have made some sensational changes to their T20 team for the 2-match series coming up against India! The relatively unknown George Bailey will be their new Captain as Cameron White has been axed following a dull show in the KFC Big Bash League. George Bailey is a 29-year-old from Tasmania who is known to hit the ball hard. Bailey is yet to play in a single international match for the Aussies! This 29-year-old has also represented the Chennai Super Kings in the IPL.

The 14-man Australian squad has a 40-year-old as well! He is a spinner and wasn’t long ago a Television Commentator for Nimbus during Australia tour of India! Well to be more precise, the old man bowls chinaman and is none other than Brad Hogg who makes an international comeback after four years! Hogg has hogged the limelight in the ongoing Big Bash League where he has taken 12 wickets for the Perth Scorchers. 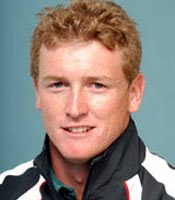 Also in the Aussie squad as expected is speedster Brett Lee who no longer plays Test Cricket. The two Twenty20 Internationals between India and Australia will be played on the 1st at Sydney and on the 3rd at Melbourne.