What Virat Kohli said after India's victory at Johannesburg

India captain Virat Kohli was expectedly pleased after the visitors defeated South Africa at Wanderers in the third Test.

India captain Virat Kohli was expectedly pleased after the visitors defeated South Africa at Wanderers in the third Test.

On India's decision to bat on a green track he said, “Many thought we were making a mistake by batting first here. But we knew it would be difficult to play on this surface in the fourth innings. There were cracks on the pitch.”

Kohli added “We required character playing on a pitch that was very difficult. Our guys showed great guts through the four days. We took up the challenge.” 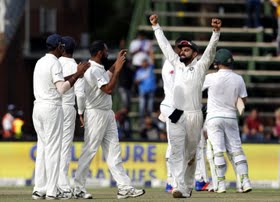 He went on to say, “We knew we were close in the first two games. This was perfect. Dean Elgar and Hashim Amla played really well, although it was not easy. You expect that from South Africa.”

Kohli said, “But once wickets go down, in pressure situations, it’s very difficult to come back. And the other good thing was we didn't leak runs.”

He had a lot of praise for the bowlers. “The bowlers have been a big positive. Sixty wickets in an away series is rare, and if the batsmen step up and understand what they need to do like they did in this game, we can win overseas,” he summed up things.