The two most successful teams of the IPL league stage go head to head as defending champions Chennai Super Kings take on Royal Challengers Bangalore in what promises to be an engrossing first playoff match of the event at the Wankhede Stadium, Mumbai on Tuesday.

The two most successful teams of the IPL league stage go head to head as defending champions Chennai Super Kings take on Royal Challengers Bangalore in what promises to be an engrossing first playoff match of the event at the Wankhede Stadium, Mumbai on Tuesday.

The first of the two play-offs called qualifier 1, a new format introduced by IPL from this fourth season, offers the winners a direct berth into the grand final on May 28 at Chennai while the losers of the match here would get another chance to make amends on May 27.

The team that gets defeated on Tuesday would play against the winners of the Eliminator between Mumbai Indians and Kolkata Knight Riders, also to be held here on May 25, in the second qualifier on Friday in Chennai, with the victors of that tie advancing to the final on Saturday.

Royal Challengers' comprehensive eight-wicket victory in their concluding round ro 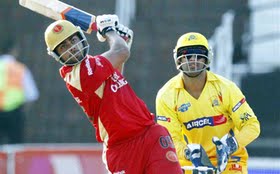 bin clash at home against Chennai pushed them to the number one spot on the league table with 19 points.

Super Kings finished second with 18 on a better net run-rate following Mumbai Indians' stunning last-over victory against Kolkata Knight Riders at the Eden Gardens last night that put them in third spot behind Bangalore and Chennai, besides earning them a spot in this year's Champions League along with the top two.

With the head-to-head score this season reading 1-1 going into tomorrow's first qualifying game for the final between the two southern outfits, the contest is expected to be intense and no-holds-barred on neutral territory.

Chennai were comfortable winners by 21 runs when the two teams clashed on April 16, which was reversed on Sunday by Bangalore with a massive drubbing.

The biggest boost for the Royal Challengers since that first meeting in Chennai has been the arrival of the marauding West Indian opener Chris Gayle who has struck the IPL like a typhoon and blown away the rival bowling attacks with his blistering stroke-play.

On Sunday too his unbeaten 75 took away any slim hopes that Super Kings might have entertained after they were restricted to a meagre 128 for 8 by the superb bowling of Zaheer Khan, S Aravind and skipper Daniel Vettori.

nine games at an incredible strike rate of nearly 190.

On the downside is the fact that once Gayle falls early, as it has happened on the rare occasion, the Bangalore batting loses its way with the other Indian players like Saurabh Tiwary and Mohd Kaif not having had enough opportunities to settle down, while Cheteshwar Pujara is injured.

made up in the bowling department to some extent.

The major plus for Bangalore going into the crucial clash is the return to his wonted form by Zaheer Khan who had struggled in the initial part of the tournament after leading the Indian attack to the World Cup.

The master of swing showed he's back to his best on Sunday and also guided fellow-left arm pacer Aravind beautifully on the field.

With the wickets in all centres starting to offer a lot of turn, New Zealand ace Vettori has also become a dangerous proposition for the rival batsmen with his tantalising left arm spin.

These three bottled up the Super Kings' progress yesterday by reducing them to a poor 24 for 2 and despite a superlative knock of 73 in 40 balls by captain Mahendra Singh Dhoni, Chennai's tally fell far below a competitive score.

The cheap send-offs of leading run-getter Michael Hussey (429 runs in 12 games), Murali Vijay (334 in 14), Suresh Raina (357 in 14) and the dependable S Badrinath (362 from 14) upset Chennai's apple cart yesterday. They would be eager to avoid this sort of rut in the return clash.

Dhoni's pyrotechnics have not only fetched the Indian skipper 341 runs but also given the Chennai innings the final flourish, but he had to play the role of the anchor as well as destroyer yesterday after the early clutter of wickets.

Dwayne Bravo, who too arrived late to bolster Chennai like his West Indian team-mate Gayle did for Bangalore, and Morne Morkel have not got sufficient chances to bat long which was to their team's disadvantage after the loss of four early

wickets at the Chinnaswamy Stadium.

The Super Kings bowling has been spearheaded in excellent fashion by Doug Bollinger (15 wickets) and off spinner R Ashwin (16 wickets) who kept even Gayle quiet initially.

Morkel too has done well with a haul of 15 wickets though he has been a bit expensive and the team would be hoping Bravo hits the straps in this department tomorrow to give it more teeth.