Sri Lanka raised a controversy of sorts in their last Super Eights game against England when Kumar Sangakkara turned out for the toss alongside Stuart Broad.

Sri Lanka raised a controversy of sorts in their last Super Eights game against England when Kumar Sangakkara turned out for the toss alongside Stuart Broad. This was despite the original Skipper Mahela Jayawardene’s name figuring in the playing XI. The Vice-Captain of the Sri Lankan Side – Angelo Mathews was also part of the XI but instead of him or Mahela, it was Sangakkara coming out to toss the coin. 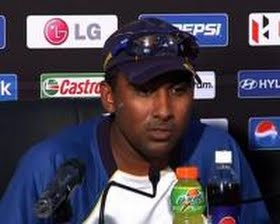 Sangakkara was more of a namesake Captain as most of the moves on the field or regards to the batting order were being made by Mahela Jayawardene. At the post match presentation also, it was Sangakkara doing the honours for Sri Lanka. While earlier at the toss, Sangakkara just mentioned it was just to change the luck with Mahela losing three tosses, but later on the real reason was revealed.

It was that Mahela Jayawardene and Angelo Mathews were in the danger of facing a one-match ban for slow over rates in the previous games. Both the players it is learnt would have missed the Semi Final had Sri Lanka been slow with the over-rate against England, and yes of course, if one of them was Captain for that game. Sangakkara who didn’t have any pending charges on him relating to over-rate was thus sent in as the acting Captain. The Lankans later dismissed this move as a pure tactical one and not one with any malice behind it.

Here is Mahela Jayawardene talking about the controversial decision and also about facing Pakistan in the Semi Final: