RCB vs KXIP review: Chris Gayle proves he is not finished yet

A few matches back, Royal Challengers Bangalore dropped Chris Gayle from the playing eleven owing to his poor run of scores

A few matches back, Royal Challengers Bangalore dropped Chris Gayle from the playing eleven owing to his poor run of scores. While Gayle was indeed short of runs, the decision took many by surprise for the West Indian left hander has, by far, been the most player in the T20 league over the years. In this edition, he had only one score of note before Wednesday clash against Kings XI Punjab. Add to that his axe from the playing eleven for one of the matches, and there were question marks over whether Gayle had gotten past his sell-by date even in his favourite format. However, the tall Caribbean lad answered all the queries with a spectacular retort. 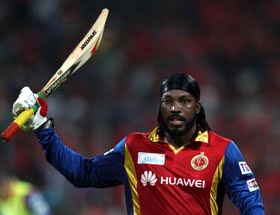 One of the reasons Bangalore have been among the most exciting sides over the years has been because they had have Gayle firing on all cylinders at the top of the order. In a couple of editions, he almost singlehandedly carried the team through to great heights. This is why the lack of runs from his bat was a worry this season. But, no longer. Gayle played what was a spectacular knock, but a routine one by his standards, standing tall, and punching the ball all over the place. It was the kind of innings he needed to bring his IPL alive and, at the same time, keep his side very much in the hunt for a playoffs spot.

What Gayle did with his smashing knock was decimate the already low confidence of Kings XI Punjab's players. The West Indian got to his hundred off merely 46 balls and his assault, particularly on Mitchell Johnson, was further proof of the fact that in this format, no bowler is good for him, if it is Gayle's day out. What Gayle does brilliantly when he plays such scintillating knocks is that he clears the field more often than finding the ropes. This trademark of his was evident at Bangalore as well. He hit seven fours, and smashed 12 sixes. When Gayle sets up the innings in such a manner, it automatically makes things easy for the rest, as was evident with AB de Villiers' cameo.

Punjab were already struggling going into the match, but this loss will hurt them further. To be fair to their bowlers, there is not much one can do when Gayle is in such sizzling form. Still, they could have done better than how they eventually fared, looking clueless. Mitchell Johnson, yet again, could not lead the way, and the rest followed his wayward example. Sandeep Sharma, Axar Patel and Karanveer Singh all were found out against Gayle's brilliance, and it was only Anureet Singh who escaped unscathed. Of course, it would have helped had the fielders held their catches.

Punjab were clearly scarred by the manner in which Gayle trampled them, and the shock element was very much visible in their batting. The openers Murali Vijay and Manan Vohra were poor, and the rest only followed suit. None from the big three of Glenn Maxwell, George Bailey or David Miller could come up with a big score, and even with a breezy knock from Axar, Punjab could not cross 100. Bangalore had it all easy, but Mitchell Starc and S Aravind still deserve credit for their four wickets each. As for Punjab, it turned out to be one of their most embarrassing efforts.