They exploited the pitch better than us: Kohli on Pune disaster

India's Test captain Virat Kohli admitted that India were completely outplayed in the first Test against Australia in Pune. Kohli dubbed India's catastrophic batting performance as team's worst in the last two years. He further stated that the Aussies exploited the pitch better than the hosts, as India's unbeaten 19-Test run came to an end.

"It's been a good run for us but we got outplayed in this game. We got to take it on the chin, accept that they outplayed us. It was our worst batting display in the last two years. We need to see what we did wrong," said Kohli in the post-match presentation. 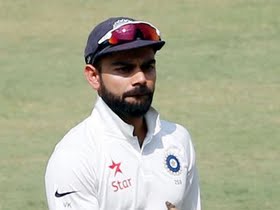 Kohli pointed out that two bad sessions cost India. "They exploited the pitch better than us. They put us under pressure throughout and deserved to win this game. We've had two really bad sessions and to pull it back against a quality side is very difficult. No excuses. Sometimes, you have to take your hat off and tell the opposition well done," the Indian skipper went on to say.

Kohli's counterpart Steve Smith, who produced a brilliant hundred, praised man of the match Steve O'Keefe for his effort. "Thought it was going to be hard work. I'm proud of the way the guys played. Winning the toss was a bonus, good plans in place. O'Keefe was outstanding. We've got some good players of spin and good spinners.

"It's been 4502 days since Australia won a Test in India, I know it to the day. When he (O'Keefe) pulled his length back slightly, it felt he'd get a wicket every ball. You need to have some luck on a wicket like that. It took a lot of grit and determination," said Smith.

The second Test begins in Bangalore from March 4.