Pakistan announced 15-man squad for the World Cup 2015. Fast bowler Umar Gul has been left out of Pakistan 15-man squad.

The Pakistan Cricket Board announced its 15-member squad for the ICC Cricket World Cup 2015 to be held in Australia and New Zealand on Wednesday(January 7). The squad contains two openers, four middle order batsmen, five pace bowlers, one spinner, two all-rounders and a wicket-keeper/batsman. Fast bowler Umar Gul has been left out of Pakistan 15-man squad. 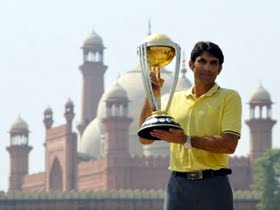 Moin also gave his vote of confidence to the captain Misbah-ul-Haq, who had suffered a hamstring injury during the home series against New Zealand last month, but recovered after extensive rehabilitation.

Pakistan play first match in Pool B against India at the Adelaide Oval on February 15, 2015.