In-form teams Kolkata Knight Riders and Royal Challengers Bangalore will look to move up the points table when they take on each other in match number 28 of IPL 2020 at Sharjah on Monday. Both teams go into the contest with contrasting victories in their previous match. While KKR choked Kings XI Punjab by two runs in a thriller, RCB registered a comprehensive 37-run triumph over Chennai Super Kings.

Despite their recent successes, both KKR and RCB have some issues to deal with as the halfway mark of the tournament approaches. Kolkata would be mighty concerned with the fact that Sunil Narine’s action has been reported by umpires following the game against Punjab. The KKR management will need to be extra careful about utilising Narine as another warning would see him barred from bowling.

There are also question marks hanging over Andre Russell’s fitness. The big-hitting all-rounder hurt his knee after he accidentally dived into the advertising boards having missed a catch. The extent of his injury is being gauged, and his availability remains unclear. As for RCB, despite the win over CSK, they would be worried for Aaron Finch’s form. His nothing shot to be bowled against Chennai was indicative of his lack of confidence. 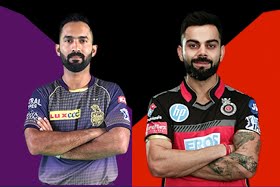 Moving over to the positives, KKR will be glad that skipper Dinesh Karthik finally got among the runs against Punjab with a cheeky half-century. With Shubman Gill, Nitish Rana, Rahul Tripathi and Eoin Morgan all contributing, KKR’s batting looks formidable even with Russell not among the runs. RCB would be glad that Virat Kohli has rediscovered his mojo. His 90 against Chennai was solid proof of his return to form. Washington Sundar, Navdeep Saini and Yuzvendra Chahal have all made match-winning contributions for RCB with the ball.

Head-to-Head Record: KKR have a good record over RCB with 14 wins and 10 losses in 24 games.

The surface at Sharjah has proved to be a batting paradise with teams constantly touching or surpassing the 200 mark.

Temperature will be in the mid to high 30s. Humidity would be around 34. Players, including MS Dhoni, have found it challenging to deal with the UAE heat.