AUS vs NZ 3rd Test: Batting first, New Zealand could only post 202 in their first inning before they were bowled out and in reply Australia have scored 54 runs at the loss of two wickets.

The first Day/Night Test match began at the Adelaide Oval with Australia taking on New Zealand in the third Test of the series. Batting first, New Zealand could only post 202 in their first inning before they were bowled out and in reply Australia have scored 54 runs at the loss of two wickets. 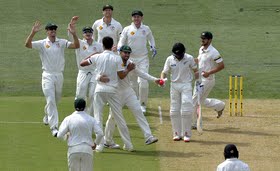 New Zealand won the toss and opted to bat first but their openers weren’t able to capitalize on that advantage. Martin Guptill was struck on the pad to be adjudged leg before wicket in the fourth over of their inning for just 1. Then Williamson came and batted positively where he struck few beautiful boundaries and reaches 19 off just 19 balls. But Peter Siddle returned in the Australian side and bowled some tight overs to Williamson where the batsman went in some shell and couldn’t get away from there. Then he was trapped in front of the wicket by a straight Yorker from Starc for 22. Hosts took only two wickets in the first session but visitors fell cheaply in the post tea session. New Zealand lost Latham, Taylor and McCullum in space of just 11 deliveries. Latham was caught by Nevill in trying to cut Lyon. Siddle took his 199th wicket in form of Ross Taylor where a in swinger took the edge of Taylor’s bat and was caught by Nevill again. Though, Lyon got wicket but Starc was brought from his end to counter McCullum and he responded with his wicket. Debutant Santner struck seven fours in his 31 runs he was bowled by Starc. At last, New Zealand was bowled out for 202 runs.

Starc and Hazlewoond took three wickets each and on the other side Siddle and Lyon took two wickets each.

Two Australian openers, David Warner and Joe Burn came to open the batting for Australia. Trent Boult’s out swinger took the outside edge of David Warner who is in form of his life and was caught in the third slip by Tim Southee. Joe Burn never looked settled on the wicket and he was bowled by Bracewell for 14 off 41 deliveries. The wicket was too hard for the batters in the night when the pink ball was swinging too much and the only option for the batsmen was to play for the survival. Australia did well by not losing too many wickets when the ball was doing a bit.