Toss: England won the toss and chose to bat first 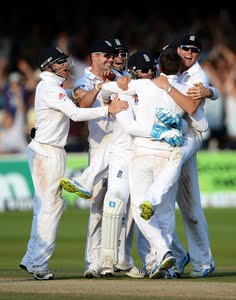 England secured a 2-0 lead in the Investec Ashes series as they completed an inevitable victory against Australia with relentless efficiency at the fag-end of the fourth day at Lord's. Australia were four balls away from taking the match into a fifth day, with England forced to take a second new ball, the extra half-hour and finally resorting to silent prayer before completing a 347-run win in the final over.

Joe Root is named Man of the Match: "I've loved every minute of it, great to get a win. There's a bit of tape [on the honours board], I'd like to see [my name] up there properly. I'd say this one [is better than maiden Test century], it's great to get a hundred in the Ashes. It's nice to contribute [with the ball too], you get an opportunity and you want to take it and it's nice to help the side as much as you can. Every time you go out to bat is an opportunity to contribute, I tried to get through it early on and have a bit of fun later."

England are very strongly placed with a lead of 263 but those three late wickets just dented their day and gave Australia some hope. The Australia bowlers showed superb spirit in that final spell, especially Peter Siddle, and if they can nip out a couple early in the morning they'll have hope of keeping England's lead to around 350.

England: W W W D D
Australia: L L L L L
Pitch Report:
There's a heatwave in the UK and the temperature will remind the Australians of home. It's also likely to produce another very dry pitch but expect more pace and bounce than Trent Bridge. Lord's tracks have often got flatter as the match has progressed.
Match Stats
1.Australia have a superb record at Lord's with 16 victories and six defeats in 36 Tests, including victories over South Africa in 1912 and Pakistan in 2010.
2. From 1953 to 1985 there were only three results in 10 Tests between England and Australia, including the Centenary Test of 1980.
3.England are aiming to win their 50th Test at Lord's. They have lost 28 and drawn 47 at HQ.
4.Matt Prior has 37 Test dismissals at Lord's, the joint-most with Alec Stewart and Godfrey Evans.
5.Steve Waugh, who scored 231 runs in four Tests at Lord's, including a century, will ring the bell before the start of play on day one.
Match Squads:
Australia team: SR Watson, CJL Rogers, Ed Cowan, MJ Clarke, PJ Hughes, SPD Smith, BJ Haddin, PM Siddle, Mitchell Starc, JL Pattinson, Ashton Agar, RJ Harris, DA Warner, MS Wade, Usman Khawaja, James Faulkner, Nathan Lyon, Jackson Bird
England team: AN Cook, Joe Root, IJL Trott, KP Pietersen, IR Bell, Jonny Bairstow, MJ Prior, SCJ Broad, GP Swann, ST Finn, JM Anderson, TT Bresnan, G Onions