The curse of being number one

What’s it with number one teams and changing fortunes. Last year, India headed to England with plenty of hopes, and lots of optimism, looking to put the seal of conviction on their newly-acquired number one status.

What’s it with number one teams and changing fortunes. Last year, India headed to England with plenty of hopes, and lots of optimism, looking to put the seal of conviction on their newly-acquired number one status. What transpired during that English summer was in total contrast, and shocking to put it mildly. India went to England as the number one team, but came back dethroned. Leave aside the fact that they were no longer number one, India did not manage to win even a T20 game on that disastrous tour. So much for being the number one Test side in the world.

What would make India feel slightly better is that England have also been bitten by the number one bug. If India travelled to England as the official best team in the world, and were pounded, the Englishmen got similar treatment in the UAE, in the Tests against Pakistan, where they were blanked 3-0. They may have come back strongly to win the ODI series. However, the damage had already been done, and England’s number one status was questioned as much as India’s. The thumping defeat at the hands of South Africa in the first Test at The Oval has once again put England’s supremacy under cloud. Remember, most of their wins have come at home, and their last contest was against the relatively under-talented Windies. 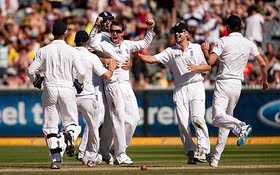 Before the second Test gets underway, England have plenty of work to do. And their skipper Andrew Strauss will have to lead from the front. He may have got runs against West Indies, but South Africa is the real challenge, and Strauss failed at The Oval, both as a batsman and a leader. The left-hander looked out of sorts with the bat, a far cry from the batsman who got two hundreds in the previous series. More disturbingly, he was absolutely clueless in the field, during the massive partnerships in South Africa’s innings – first between Graeme Smith and Hashim Amla and then between Amla and Jacques Kallis.

Agreed, his highly rated bowlers like James Anderson, Graeme Swann and Stuart Broad could have done better. Still, a lot more inventiveness is expected of someone who is captaining the number one side in the world. It is all very easy shuffling bowlers around, when the job is getting done. The real test is when things begin to go wrong, and it seems that time for Strauss is now.

If England don’t show improvements at Leeds, their fortunes could also swing downwards, akin to India. The hosts found themselves in a similar situation in Sri Lanka, but managed to save face thanks to Swann’s magnificent bowling. They need to find some inspiration all over again.