India wrapped up its Sri Lankan tour by crushing the hosts by 39 runs in the One-off T20I at Pallekele. Irfan Pathan took three top order wickets and Ashok Dinda took four wickets in the end to help India bowl out Sri Lanka cheaply for 116 in 18 overs.

India wrapped up its Sri Lankan tour by crushing the hosts by 39 runs in the One-off T20I at Pallekele. Irfan Pathan took three top order wickets and Ashok Dinda took four wickets in the end to help India bowl out Sri Lanka cheaply for 116 in 18 overs. India’s main star of the victory was the in-form Virat Kohli, who scored 68 from 48 balls and then bowled three overs for just 13 runs!

Sri Lanka’s run chase of 156 was dented by the fall of Dilshan in the first over when he played all around a full ball from Irfan Pathan to get bowled. Pathan went onto take two more wickets – one down Upul Tharanga (caught at slip driving a full ball) and a free stroking Mahela Jayawardene (lbw going back to an inswinger after a 19-ball 26) to have SL at 35 for 3. 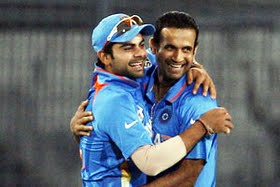 By the 10th over, R Ashwin with his first ball of the match cleaned up the stumps of Lahiru Thirimanne (20 from 15 balls) in an attempted reverse sweep. In the middle overs, SL kept on losing wickets – most important of them – Angelo Mathews (caught by Keeper with an edgy drive off Askok Dinda after a 29-ball 31), Jeevan Mendis (driving a full ball from Umesh Yadav to covers) and Thisara Perera (run out by a direct throw from Manoj Tiwary at point). Sri Lanka were certainly heading towards a defeat at 102 for 7 in 15.2 overs when Perera got out. Their only other specialist batsman left – an out of form Dinesh Chandimal holed out in the deep a couple of overs later with the score at 116 for 8.

The Indian bowling was good and got some excellent backing from its fielders barring a few errors. Irfan Pathan with his 3 for 27 in 4 overs got the Man of the Match award. Ashok Dinda contributed too with 3-1-19-4.

Some tight bowling from both pacers and spinners helped Sri Lanka restrict India to 155 for 3 in the Only T20I at Pallekele. On a nice batting surface, India couldn’t get going in the middle overs with Rangana Herath and Jeevan Mendis bowling a combined 5 overs and giving away only 30 runs.

After the early fall of Gautam Gambhir (bowled by Shaminda Eranga after missing a slog), India got going thanks to the sweet strokeplay from Virat Kohli. Ajinkya Rahane scored 21 from 25 balls with a six while adding up 74 runs with Kohli for the second wicket. Kohli went onto score 68 from 48 balls with 11 fours and a six before he got out in the 17th over hoicking Eranga to deep mid wicket.

India finished with 155 for 3 with Suresh Raina coming up with a crucial 34* (from 25 balls with 3 fours and a six). MS Dhoni struggled slightly with an unbeaten 16 from 14 balls.

Toss and Teams: Sri Lanka have won the toss and asked India to bat first in the Only T20I at Pallekele. The hosts have made three changes to the side that had lost the fifth ODI. Skipper Mahela Jayawardene, Rangana Herath and Shaminda Eranga coming in for Chamara Kapugedera, Sachithra Senanayake and Nuwan Pradeep. India have made just the one change with Umesh Yadav filling up Zaheer Khan’s place.