Brilliant performance by Indian openers Smriti Mandhana and Shafali Verma led to winning by 8 wickets against Pakistan in the fifth cricket match of the 2022 Commonwealth Games being held in Birmingham, England. It was the first win for team India and the match was reduced to 18 overs-per-side due to rain.

Winning the toss, Pakistan chose to bat first and played a steady start despite the quick fall of the first wicket. It was the ninth over when the score graph took a southward curve when Sneh Rana pocketed two wickets sending back Bismah Maroof and Muneeba Ali.

Pakistan thereafter started losing wickets and some excellent fielding by the Indian women cricketers piled pressure on the batters. A direct hit by S Meghana led Aliya Riaz to wrap up with a run-out following the wicket of Omaima Sohail, who failed to run faster than the ball to the wicket. 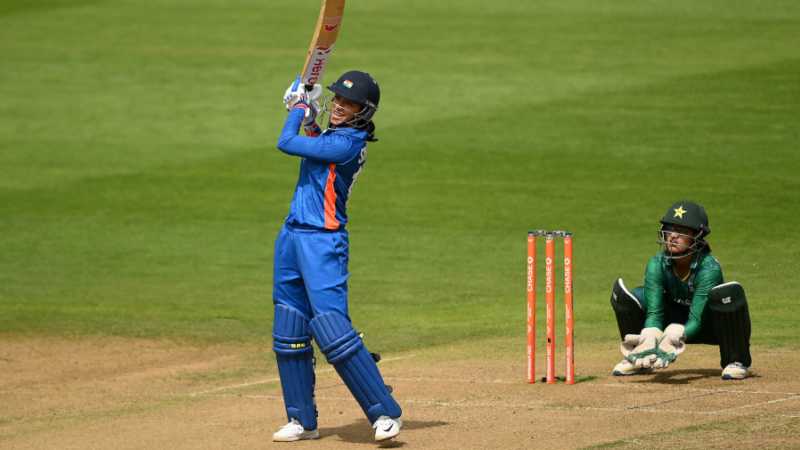 An outstanding performance by Shafali Verma while taking a diving catch displayed one of the best fielding in the match.

Pakistan was all bowled out with a score of 99 runs in the 18-over game due to rain. The Indian openers emerged with all guns blazing. Anam Amin made a fiery fifty with several 4s and 6s. Shafali Verma similarly added runs faster to the total. She was out in the last over of the Powerplay, but India was at a good run rate to chase smoothly. Mandhana made her fifty soon with a six and she remained not out. India had 8 wickets to spare.

The Kiwis won the 6th match of the 2022 Commonwealth Games by nine wickets defeating Barbados. It is the first team to progress into the semi-finals. Winning the toss, the team chose to bat first. Even though opener Alyssa Healy and Lanning remained unbeaten with 23 and 36 runs respectively, the bowlers dominated the match. Barbados failed to cope and was bowled out for 64.

The high-class top-order cricketers of the Caribbean looked like second-best against the Australian bowlers like Ashleigh Gardner and Tahlia McGrath. However, the chance to qualify still persists for Barbados if the team defeats India in their last match in the tournament.

Commonwealth Games 2022 has included women's cricket for the first time after having talks with the International Cricket Council (ICC) and partnering with the England and Wales Cricket Board (ECB). The games are being played with eight teams and in the T20I format. The teams are Australia, Barbados, England, India, New Zealand, Pakistan, South Africa and Sri Lanka.

Australia, India, Barbados and Pakistan are in Group A while the remaining four are in Group B. The group matches started on July 29 and are to wrap up on August 4. The two semis will be held on August 6 while the final on August 7. A third-place match or the bronze medal match is scheduled to be held on the same day, August 7.