Rajasthan Royals pulled off a stunning victory over hosts Royal Challengers Bangalore in Match 35 at the M Chinnaswamy Stadium in Bangalore.

Rajasthan Royals pulled off a stunning victory over hosts Royal Challengers Bangalore in Match 35 at the M Chinnaswamy Stadium in Bangalore. Written out of the contest with as many as 65 needed to get from the last four overs, Steven Smith and James Faulkner showed their hitting power to take Rajasthan Royals home with 7 balls to spare.

Over no. 17 from Mitchell Starc was taken for 21 runs, the next by Dinda went for 23 which actually gave a realistic chance of a Rajasthan win. Then Varun Aaron with the crucial 19th over conceded the remaining 21 runs of the target in five balls to concede victory to the visitors. 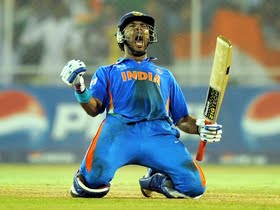 James Faulkner who also took 1 for 42 in 4 overs got the Man of the Match. The all-round performance from Yuvraj Singh went in vain. After sizzling back into form with 83 from 38 balls with 7 fours and 7 sixes, Yuvraj rolled his arm over to capture 4 for 35 in four overs for the Royal Challengers Bangalore. Batting first after winning the toss, RCB were off to a slow start at 40 for 3 in 8.1 overs before Yuvraj and AB de Villiers got into a terrific partnership. AB de Villiers smashed 58 from 32 balls with a four and 5 sixes while adding 132 runs in 53 balls with Yuvraj Singh for the fourth wicket.

Rajasthan Royals are now sitting pretty at no.3 in the points table behind Kings XI Punjab and the Chennai Super Kings following their sixth win in 9 matches. RCB are still stuck with just the three wins in 9 matches.