Virat Kohli and Kedar Jadhav hit remarkable hundreds as India chased down 351 in spite of having lost wickets cheaply. Kohli and Jadhav joined forces when India were in deep trouble at 63 for 4. By the time they were separated, the score had rocketed to 263, as the duo added exactly 200. Kohli made 122 from 105 while Jadhav slammed 120 from merely 76 balls as India rollicked to victory. After the duo fell, Hardik Pandya held his nerves to hit an unbeaten 40 from 37 balls to guide India to a memorable win.

The partnership between Kohli and Jadhav was undoubtedly the clinching factor for India. Both the skipper and the home boy hit boundaries all over the park. It was Jadhav’s knock that stood out on the day, for the sheer bravado that it was scored with. Rarely does a Kohli hundred get overshadowed. However, in this case it did as Jadhav raced away to a ton in merely 65 balls. He scores his runs at a strike rate of 157.89 balls. That says it all. Jadhav’s knock was studded with 12 fours and four sixes, and never allowed England in the game. 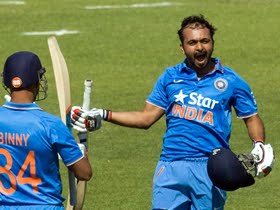 There were two occasions when India were in trouble, but did well to get out of it. At the start, they lost four big wickets, and the game seemed over. Lokesh Rahul, Shikhar Dhawan, Yuvraj Singh and MS Dhoni all fell cheaply. But, Kohli and Jadhav clearly had other ideas. However, both were dismissed with the score under 300. And, Ravindra Jadeja too played a poor stroke to get dismissed at a crucial stage. Once again, it seemed that England might have come back into the game. But, Pandya played some good strokes to ensure India got over the line.

Earlier in the day, England smashed 350 after being put into bat. Alex Hales fell early, to a brilliant run-out by Jasprit Bumrah, but Jason Roy and Joe Root took on the Indian bowlers, and both scored 70s to put England in a position of comfort. Contributions kept coming all round as skipper Eoin Morgan chipped in with 28 from 26 while Jos Buttler hit a quick 31. But, when Root was sent back in the 42nd over with the score reading 244 for 5, India had a chance to kept England down. Ben Stokes, however, hit a scintillating 62 from 40 to lift England to 350.

It definitely wasn’t a day for the bowlers, as the number of runs scores suggest. Umesh Yadav went for 63 in his seven, Bumrah for 79 in his 10 and Ashwin for 63 in his 8. It was only Pandya who stood out with figures of 2 for 46. For England, Stokes was slammed for 73 in his 10, Adil Rashid was blasted for 50 in his five while Moeen Ali conceded 48 in 6.1 overs. England were never in the game once Jadhav and Kohli got their act together, and the ease with win India won should worry them.