Former Australian cricketer-turned-commentator Dean Jones died on Thursday after suffering a heart-attack in Mumbai. He was only 59. Jones was in India as part of the IPL commentary team. According to reports, the ex-cricketer suffered a massive heart attack around noon.

A report in ESPNCricinfo stated that Jones had breakfast this morning and even attended a pre-match debriefing. After that he returned to his room and suffered a heart attack. 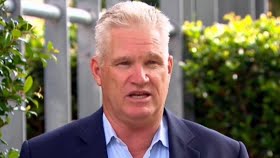 "It is with great sadness that we share the news of the passing away of Dean Mervyn Jones AM. He died of a sudden cardiac arrest. We express our deep condolences to his family and stand ready to support them in this difficult time," Star India, for whom Jones was commentating, confirmed through a statement.

In a career spanning a decade, from 1984-1994, Jones featured in 52 Tests and 164 ODI, scoring 3,631 and 6068 runs respectively. He is most remembered for his epic double century in the incredible tied Test between India and Australia at Chennai in 1986, which came under extreme sapping conditions. Jones was part of Australia's 1987 World Cup-winning squad, and was nothing short of an ODI legend, renowned for his innovative strokeplay and quick running between the wickets.

Having retired from all forms of the game in 1997-98, Jones took to commentary, and made a name of himself as an entertaining yet knowledgeable expert. He did court controversy as well, none more infamous when in a slip of the moment he referred to Hashim Amla as a terrorist.

Releasing a statement Cricket Australia chairman Earl Eddings said, "Dean Jones was a hero to a generation of cricketers and will forever be remembered as a legend of this great game Anyone who watched cricket in the 1980s and 1990s will fondly recall his cavalier approach at the crease and the incredible energy and passion he brought to every game he played.

"Although many remember him for his brilliance in the 50-over game, arguably Jones' finest moment in the national team came in scorching conditions in Chennai in 1986, where his selfless and courageous innings of 210 helped Australia to a famous tie against India.

"Jones remained an immensely popular figure in Australian and Victorian cricket throughout his life and was a much-loved columnist and commentator in every corner of the cricketing world.

"This is a truly sad day. Deano's loss will be felt not just at home in Australia, but across the globe. Our thoughts and best wishes are with his wife Jane and daughters Isabella and Phoebe."