Pakistan-England series review: Visitors would be elated with end result

If Pakistan were told at the beginning of the Test series in England that the end result would be a 2-2 draw, they would have taken it without much complaints. After all, they did not arrive in England with a team of high pedigree.

If Pakistan were told at the beginning of the Test series in England that the end result would be a 2-2 draw, they would have taken it without much complaints. After all, they did not arrive in England with a team of high pedigree. And, when the series began, there was a lot of attention centred around Mohammad Amir and the spot-fixing controversy. To their credit, Pakistan did not let the distractions affect them. And, while they were inconsistent, it was a tribute to their ability that they managed to win two of the four Tests. England, on the other hand, would be extremely disappointed at having been unable to finish off the contest, after winning two Tests in a row.

It was a memorable series for Pakistan in that they competed against a strong England outfit in the latter's home territory, and finished with honours even. The skipper Misbah-ul-Haq led from the front. His hundred in the opening Test set up the series nicely, and while he couldn't match up to his high standards in the subsequent games, the others chipped in. Take the case of Younis Khan for example. He struggled for rhythm throughout the series. But, in the final Test of the series, with their backs to the wall, Younis delivered. It was the stuff legends are made of.

In fact, Pakistan were able to compete on even terms specifically because someone or the other rose to the challenge at hand, especially in the first and the last Test. Yasir Shah was the best example. The leggie ran through the England batting line-up in the opening Test without much trouble to give his team the unexpected 1-0 lead. Then, after struggling for a couple of Tests, he came back into his elements in The Oval game, once again making an impact. The cases were similar with Asad Shadiq and Azhar Ali, who shone at different points in the match. One can only wonder England's plight had they fired more consistently.

For the record, England did not lose the series. But, they would be the more disappointed of the two teams considering that they went into the final Test with a 2-1 lead, and back-to-back Test wins. They were handicapped in a big manner by a number of their inexperienced batsman, who could not stand up to the Pakistani challenge. Opener Alex Hales was the biggest letdown of all. After having impressed against Sri Lanka, he would have been looking forward to a good series against Pakistan. But, one fifty was all he had to show for his efforts across four Tests. And, even that wasn't an anywhere near convincing effort. 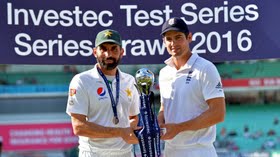 The lack of runs from the middle order was one of the biggest reasons for England's lack of success with the bat. James Vince has probably played his last Test for a while, after having failed to register a single half-century in his Test career so far. Gary Ballance got a couple of decent scores, but he needed to do a lot more to win back complete faith of the selectors. The performance of Alastair Cook, Joe Root, Jonny Bairstow and Moeen Ali benefited the hosts. And the quartet had a big role in enabling England win two Tests. Then again, England could not dominate completely as the likes of Jimmy Anderson and Stuart Broad were not in full flow with the ball.