SL vs WI 1st Test Day 3 report, Live score: Rangana Herath, on rather expected lines, put Sri Lanka in a great position to win the first Test against West Indies at Galle, possibly by an innings.

Rangana Herath, on rather expected lines, put Sri Lanka in a great position to win the first Test against West Indies at Galle, possibly by an innings. He finished with six wickets in the first innings, destroying Windies batting, and playing the pivotal role in them enforcing the follow-on. He then dismissed Kraigg Brathwaite in the second innings as well. West Indies ended the day at 67 for 2, still behind by 166 runs. West Indies lost Shai Hope early in the second innings. He played on to Milinda Siriwardana, and gave the debutant his first Test wicket. Brathwaite and Darren Bravo then battled hard to put on 39 in 11 overs. 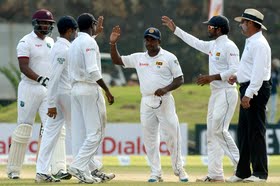 West Indies however stumbled against Herath again. The left-arm spinner again troubled Braithwaite, and claimed him as the batsman played down the wrong line. The umpire immediately raised his hand. Braithwaite reviewed the decision, but there was no conviction in the same, and the third umpire did not fight anything fruitful to overthrow the decision. The entire day West Indies were on the back foot, and struggled for the slightest of momentum. Unless something drastic happens, a four day finish seems more than likely. Heavy rain is possibly the only thing that may save the Windies, but even that may be not enough.

West Indies may have harboured brief hopes of avoiding the follow-on as their lower order put up some unexpected resistance. Kemar Roach and Jerome Taylor added 46 for the eighth wicket while the ninth wicket partnership added 34. Yet again, it was Herath who came in the way of Windies fightback. He sent back Roach and Shannon Gabriel off consecutive balls. Incredibly, this was just an over after Sri Lanka took the second new ball. Herath ended with figures of 6 for 68, and West Indies were bowled out for a highly disappointing 251. Considering the rain threat, Angelo Mathews had little hesitation in sending Windies back into bat again.

The most terrible aspect of West Indies' batting was that most of their batsmen got starts, but only one of them crossed the fifty mark -- Darren Bravo. Roach and Taylor showed the top order batsmen how to play. They were solid in defence, and also frustrated the Lankan bowlers to an extent. But, too much damage had already been done by then. Herath troubled Marlon Samuels, and narrowly missed trapping him lbw earlier in the day. But, Herath had the eventual laugh. After Samuels smashed a ball into the boundary, he misjudged a skidder and was bowled to deal West Indies with a major blow.

Bravo held one end up, trying to give his side some sort of a total, and an outside chance of saving the game. He also smashed a couple of pleasing fours off Tharindu Kaushal. At the other end though, Jermaine Blackwood edged Dhammika Prasad to slip. It was a poor shot as Bravo had settled in nicely. The bigger blow for West Indies was dealt when Herath sent back Bravo at the stroke of lunch. The batsman had just crossed his fifty when he took a swipe at the bowler, only for Dinesh Chandimal to stunning one-handed catch at short midwicket. The lower order put up some rather commendable resistance. But, it was far from enough for the visitors.