Australia defeated West Indies 2-0 in the three match Test series, with the final match at Sydney, a heavily rain-hit game, being drawn. We take a look at the best performers in the lopsided series

Australia defeated West Indies 2-0 in the three match Test series, with the final match at Sydney, a heavily rain-hit game, being drawn. We take a look at the best performers in the lopsided series.

Adam Voges: The 36-year-old had a spectacular series, remaining unbeaten both times he stepped on to the pitch with the bat in hand. He finished the series with 375 runs, smashing a career-best 269 at Hobart, and following it up with another unbeaten 106 at Melbourne. The West Indies had no idea how to dismiss him, and thanks to them in main, Voges now possesses a spectacular Test average of 85.66. 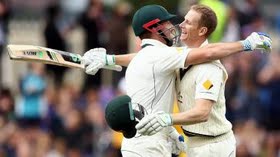 Steven Smith: The Australian captain continued his great form, scoring 214 runs in three innings, remaining unbeaten on two occasions, thus finishing the series with a spectacular average of 214. Smith scored 134 not out and 74 not out in the victory at Melbourne. He didn’t have much to do in the other two games.

Darren Bravo: He was the most consistent West Indian batsman, finishing the series with 247 runs at an average of just under 50, with one hundred and one fifty. Bravo hit a pleasant 108 at Hobart, and came up with a fluent 81 at Melbourne. While he looked good during most of his visits to the crease, West Indies would have hoped he went on to register bigger scores.

David Warner: The dashing opener continued to be among the runs against West Indies. He ended the series with 226 runs at an average of 75 with one hundred and one fifty. Warner kicked off the series with a polished 64 at Hobart, and finished it off with a dazzling unbeaten 122 in the rain-hit encounter at Sydney. Alas, his dream of scoring a ton in the Boxing Day Test remained unfulfilled.

Usman Khawaja: He played only two innings during the Melbourne Test, and finished with 200 runs, making 144 and 56 in his two visits to the crease to finish with an even average of 100.

Kraigg Brathwaite: The West Indian opener batted with resolve, and scored 229 runs in the series at an average of 45.80 with two half-centuries. He made 94 and Hobart and 85 at Sydney, thus missing out on a hundred twice.

James Pattinson: The young Aussie speedster stood out, finishing the series as the top wicket-taker with 13 wickets at an average of 22.46, and a strike rate of 37. Pattinson claimed one five-wicket haul in the series. He began with 5 for 27 at Hobart, claimed six wickets at Melbourne and picked up two at Sydney.

Nathan Lyon: The off-spinner was the joint leading wicket-taker. His 13 scalps came at an average of 25.46, and a strike rate of 55. His best performance was at Melbourne, where he ended with seven wickets. At Sydney and Hobart, he picked up three wickets each.

Josh Hazlewood: The medium pacer impressed with his eight wickets at an average of 27. He stood out at Hobart with 4 for 45 and 3 for 33.