Mumbai Indians beat Rajasthan in a thriller to enter Final

Mumbai Indians defeated Rajasthan Royals in a thriller to enter the Final of IPL 6 against the Chennai Super Kings. Needing 165 to win, Mumbai Indians were coasting along thanks to Dwayne Smith’s fifty but out of nowhere lost some key wickets to slip into a losing position.

Mumbai Indians defeated Rajasthan Royals in Qualifier 2 to make it to the Final of IPL 6 which will be against the Chennai Super Kings. Needing 165 to win, Mumbai Indians were coasting along thanks to Dwayne Smith’s fifty but out of nowhere lost some key wickets to slip into a losing position. A crucial cameo from AT Rayudu helped the Mumbai Indians to scrape through to a nervous win.

Batting first, Rajasthan Royals were off to a solid start of 44 for 1 in 6.3 overs before losing a couple of key wickets of Shane Watson and Sanju Samson to slip to 64 for 3 in the 10th over. Skipper Rahul Dravid (43 from 37 balls with 7 fours) was batting beautifully before he got out early in the 13th over flicking Harbhajan Singh to Rohit Sharma to leave his side at 87 for 4. Three out of the four wickets to fall were grabbed by Harbhajan Singh.

Rajasthan Royals were in further trouble when they lost the wickets of Stuart Binny (27 from 17 balls) and Kevon Cooper got out in the space of three balls in the 16th over. At 108 for 6, the situation was looking hopeless for the Royals but a crucial cameo of 31* from 17 balls by Wicket Keeper Dishant Yagnik coupled by a lousy last over from Lasith Malinga helped the batting side recover. Malinga sprayed a couple of wild full tosses down the legside and outside off with the ball slipping away off his hand. The last over that he bowled went for 18 runs to help the Rajasthan Royals to 165 for 6. 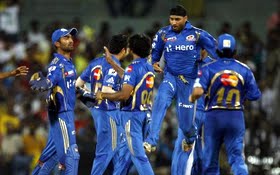 Mumbai Indians in their run chase were off to a dream start with the young Aditya Tare striking the ball nicely with Dwayne Smith. The opening duo took the Mumbai Indians to 70 in 9.1 overs before Tare (35 from 27 balls) departed. Mumbai lost a couple of wickets that of Dinesh Karthik (22 from 17 balls) and Skipper Rohit Sharma (2 from 8 balls) to find itself slightly shaken up at 128 for 3 by the 16th over.

Rajasthan bounced back in the game when they got the big wickets of Dwayne Smith (62 from 44 balls with 6 fours and 2 sixes) and Kieron Pollard (11 from 6 balls). Mumbai after Pollard’s exit needed 25 runs from 15 balls and the experienced duo of AT Rayudu and Harbhajan Singh held their nerve to finish the victory. Harbhajan Singh got the Man of the Match award.

Toss and Teams: Rahul Dravid has won the toss and his team the Rajasthan Royals who are unchanged have elected to bat first. Mumbai Indians have made one change with Rishi Dhawan coming in for Munaf Patel.

Update at 7:45 PM: The Second Qualifier Match of IPL 6 between the Mumbai Indians and the Rajasthan Royals has been delayed by wet outfield which is the result of heavy showers in the evening. In case of the match being abandoned, there will be a reserve day tomorrow. But there is every possibility of a match tonight as the rain has stopped at Kolkata.