Pujara, Ashwin rescue India on a turning pitch at the Wankhede

India have gained the upper hand over England in the Second Test at the Wankhede Stadium in Mumbai by posting a healthy total of 266 for 6 on what has been a rank turning pitch right from the first session. It is not just the turn but the bounce and pace in the pitch that will ensure that this Test Match will be a low scoring contest for sure.

India have gained the upper hand over England in the Second Test at the Wankhede Stadium in Mumbai by posting a healthy total of 266 for 6 on what has been a rank turning pitch right from the first session. It is not just the turn but the bounce and pace in the pitch that will ensure that this Test Match will be a low scoring contest for sure. Cheteshwar Pujara has been the architect of the Indian innings scoring a well deserved 3rd Test Century. His wonderful efforts were well complemented by R Ashwin, who went onto score an unbeaten half century. 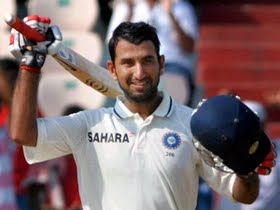 The post Tea session saw the early loss of Skipper MS Dhoni for India. Dhoni (29 from 64 balls) was committed onto the frontfoot to a slightly short of good length delivery from Monty Panesar which took off with nasty bounce and turn, to hit the handle and a smart low catch was held at gully by Swann. With India at 169 for 6, England might have thought they had got into the tail now. But R Ashwin was going to utilize every chance he gets to bat out in the middle to showcase his hidden talent.

Along with Pujara, Ashwin negotiated the English bowling comfortably and the pair kept the scoreboard busy all the time. Ashwin kept on playing sublime shots with sweet timing and the ball raced away effortlessly to the boundary. Even the second new ball couldn’t break the 7th wicket stand between Pujara and Ashwin which has added 97 runs so far in 28.4 overs. Pujara remained unbeaten on 114 (from 279 balls with 10 fours) and R Ashwin stroked his way to 60* (from 84 balls with 9 fours) by the close of play.

England had a good day on the field but this 7th wicket stand between Pujara and Ashwin took the initiative away from them. Monty Panesar looked as the most dangerous bowler for the visitors taking 4 for 91 in 34 overs.

Tea Report: England kept on making inroads in the second session of the first day’s play at the Wankhede Stadium but have been defied for sometime by a fighting partnership between Pujara and Skipper Dhoni. By Tea, India has recovered slightly at 167 for 5 in 60 overs with Pujara rock solid and MS Dhoni trying his best to come up with a good knock under testing conditions.

The first breakthrough in the afternoon session for the visitors came after 35 minutes or so when Virat Kohli drove Monty Panesar uppishly to get caught by the tumbling short extra covers. Kohli (19 from 55 balls) was lunging forward but the ball had just stopped onto the bat after gripping the surface and with it taking a puff of dust. Yuvraj Singh who walked in with India in trouble at 118 for 4 in the 39th over was cleaned up by Graeme Swann with an arm ball that straightened from round the sticks for a two-ball duck.

England was all over India with the score at 119 for 5 but a determined MS Dhoni (27* from 62 balls with 4 fours) joined Cheteshwar Pujara (77* from 185 balls with 6 fours) to bail the hosts out of trouble. There was of course plenty of luck for both the batsmen on a pitch that is tailor made for the spinners.

Lunch Report: An exciting morning session at the Wankhede Stadium saw England hold the edge as India slipped to 87 for 3 in 28 overs by Lunch on Day 1. The pitch promises to be full of excitement with the batsmen likely to get out any time because of its crumbling nature and at the same time they have enough opportunities to play some lovely shots.

Monty Panesar in his international comeback turned the morning session on its head by cleaning up the stumps of Virender Sehwag and Sachin Tendulkar. The Test match started with the first ball hit clipped through mid wicket for a boundary by Gautam Gambhir but only to be given out lbw in the next delivery off James Anderson. It wasn’t the most convincing lbw decisions from Tony Hill but Gambhir shuffling across foxed him with the ball just pitching around leg and straightening.

India settled down after Gambhir’s early exit with Virender Sehwag and Cheteshwar Pujara putting up a busy partnership. Things were going along smoothly until the 17th over when Sehwag (30 from 43 balls with 4 fours) yorked himself and got bowled playing all around a full ball from Monty Panesar with a flick shot to leave India at 52 for 2.

Sachin Tendulkar walked in and showed intent to play positively but only to get his off stump cleaned up by Monty to a delivery that spun away from middle. Tendulkar (8 from 12 balls) did the cardinal mistake of closing the face of the blade and trying to flick across the line and against the turn and leaving his off stump exposed.

By Lunch, India has got Cheteshwar Pujara batting nicely on 38 (from 86 balls with 4 fours) along with Virat Kohli (6* from 26 balls).

Toss and Teams: MS Dhoni won the toss once again and has decided to bat first in the Second Test at the Wankhede Stadium in Mumbai. The pitch does have some grass on it but it won’t have any effect for the fast bowlers. Instead it is going to be a rank turner and India has gone in with three spinners! Experts suggest that the Test Match may all be over on Day 4.

India have made one change with Harbhajan Singh coming in for the injured Umesh Yadav. England have made two changes with Jonny Bairstow and Monty Panesar coming in for Ian Bell and Tim Bresnan.