PAK vs ENG 1st Test Day 4 report, Live score: Captain Alastair Cook played a marathon to end the Pakistan’s chances of winning the first Test. Cook scored a magnificent double century (263 runs) as bad light ended the fourth day’s play with England of 569 for 8 which means they lead Pakistan by 46 runs with one day to go in the Test.

Captain Alastair Cook played a marathon to end the Pakistan’s chances of winning the first Test. Cook scored a magnificent double century (263 runs) as bad light ended the fourth day’s play with England of 569 for 8 which means they lead Pakistan by 46 runs with one day to go in the Test.

A flat pitch in Abu Dhabi allowed Cook to fill his boots. He did that and more, making 263 in an innings that lasted just the 13 hours and 56 minutes. Cook mastered everyone and everything during his 836 minutes of batting, spread over three days, to such an extent that he disguised the difficulties experienced by his teammates. Had Cook been dismissed on the second evening by his second ball, which almost landed on his stumps, England would have been very far from safe. Though most of the English batsmen spent quality time at the crease but apart from Cook, Joe Root was the only one who looked comfortable there. Mooen Ali and Ian Bell played many deliveries and occupied the crease for long time but 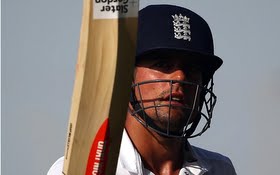 their stay at the crease was not satisfying. Cook’s proportion of boundaries – only 18 – was very low. He went 36 overs without scoring a four, and then it was a sweep he bottom-edged. But he tirelessly worked his ones and twos. He scored 127 singles, eschewing any attempt at glamour in defiance of all the fashions of the age.

Cook was dismissed when he top-edged a sweep to short fine-leg. Almost all his sweeping had been done from outside offstump against Zulfiqar Babar. This time Shoaib Malik landed an offbreak outside Cook’s legstump – and in the process he recorded the most arcane of all the statistics stacked up during this run-fest: it was only the second time in Tests that a double-centurion (Malik had made 245) had dismissed another. When Shoaib Malik was dismissed for 245 in Pakistan's first innings, he looked almost relieved to be out. But when Cook was finally out for 263, caught at short fine leg having top-edged a sweep, he looked rather bemused at the shot he had played. Such are Cook's mental and physical powers, it was a surprise he made a mistake at all. It just looked like he could just keep going on and on and on. The left-hander didn't move through the gears at any stage. That's because he doesn't have any gears; he just progresses at one, moderate pace. As for the importance of his innings in terms of the game, Captain Cook had set the tone for England in his own style. He led by example, despite having spent nearly two full days in the field before even facing a ball.