The new World no.1 Test team South Africa will be challenged by hosts Australia in a 3-match Test Series that gets underway at the Gabba from the 9th of this month. Let us look at the history of various tours of South Africa down under.

The new World no.1 Test team South Africa will be challenged by hosts Australia in a 3-match Test Series that gets underway at the Gabba from the 9th of this month. Let us look at the history of various tours of South Africa down under.

Well the first South Africa tour of Australia dates back to 1910/11. The Springboks were led by Wicket Keeper batsman Percy Sherwell while Australia were led by Clem Hill. The teams played in a 5-Test Match Series which was won by Australia 4-1.

After a gap of 20 years or so, South Africa visited Australia for their second tour of the country. It was a time when Don Bradman was at his peak and the result was a 0-5 whitewash for the tourists led by middle order batsman Jock Cameron. Don Bradman opened the Series with a pounding knock of 226. For the record, the Aussies were led by opening batsman Bill Woodfull.

Again there was a gap of 20 years in 1952/53 when South Africa toured Australia, this time it was an incredibly drawn 5-Test match Series with both the sides winning two Tests each while one Test ended in a draw. The Proteas were led by middle order batsman Jack Cheetham while the Aussies were led by top order batsman Lindsay Hassett.

The next South Africa tour of Australia was held ten years later in 1963/64 with the teams drawing the 3-match Test Series 1-1. By this time, the South Africans were boasting of a few great players like Peter Pollock, Eddie Barlow, Graeme Pollock and the outstanding fielder Colin Bland. Australia were led by opener Bob Simpson in four Tests and leg spinning great Richie Benaud was the Skipper during the first Test. The South Africans were under opener Trevor Goddard.

For 30 years there was no visit from South Africa to Australia as the former were banned by the ICC because of its government’s apartheid. So it was a historical tour of Australia in 1993/94 for the South Africans following the re-entry in international cricket. Although SA missed lots of international cricketing action, its team always had world class batsmen and fast bowlers. After an injury to the original Skipper Kepler Wessels (who incidentally also played Test Cricket for Australia), the South Africans under a young Hansie Cronje forced a 1-1 draw in the 3-Test match Series. For the record, the Aussies were led by the great Allan Border. 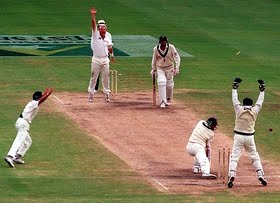 Four years later, the South Africans were a side too strong to beat. However, the Hansie Cronje led Proteas went down to the Mark Taylor led Aussies by 0-1 in a short 3-match Test Series. The reason for the South African defeat was the devastating leg spin bowling from Shane Warne in the second Test at Sydney.

In 2001/02, Australia with a powerful bowling attack led by Glenn McGrath and Shane Warne whitewashed the Proteas 3-0. The Aussies batting was also too strong and was led by Steve Waugh while the Proteas recovering from the after effects of the Hansie Cronje Match Fixing Gate were led by all-rounder Shaun Cronje.

The next SA tour of Australia was in 2005/06 in which the Aussies led b Ricky Ponting defeated the Graeme Smith led team 2-0 in a 3-Test Match Series.

The South Africa tour of Australia in 2008/09 was a cracker with all the three Tests producing results. South Africa made history under Graeme Smith by winning its first ever Test Series down under.

All in all, the Proteas have played 35 Tests in Australia till date and have lost 20 Test matches! They have managed to pull off 7 Test victories while drawing 8 matches.