An unsung East Zone team emerged as the surprise winners of this season’s Duleep Trophy. This was only the first time in history that the East Zone has won the Duleep Trophy. The East Zone led by Natraj Behera thrashed the Piyush Chawla led Central Zone by an innings and 20 runs inside three days in the Fina at the Holkar Cricket Stadium in Indore. 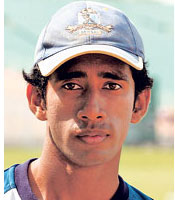 Electing to field first after winning the toss, East bundled out Central for just 133 in 49.3 overs with Bengal fast bowler Ashok Dinda and Shami Ahmed taking four wickets each. East Zone in reply scored 370 to take a sizable first innings lead of 237 runs. India Test Wicket Keeper Wriddhiman Saha was the hero for East Zone scoring a superb 170 from 245 balls with 25 fours and a six. Anustup Majumdar helped himself to 52. For the Central Zone, Bhuvneshwar Kumar, TP Sudhindhra and Skipper Piyush Chawla took three wickets each.

In their second innings, Central Zone got bowled out for 217 in 61 overs with their opening batsman Vineet Saxena absent hurt. Once again the damage for East Zone was done by the two seamers Ashok Dinda (3 wickets) and Shami Ahmed (4 wickets).