First it was Monty Panesar and Graeme Swann then Saeed Ajmal and Mohammad Hafeez and now James Tredwell. Indian batsmen are traditionally known to be great players of spin, who even gave the great Sharne Warne a harrowing time when the leggie was at his peak.

First it was Monty Panesar and Graeme Swann then Saeed Ajmal and Mohammad Hafeez and now James Tredwell. Indian batsmen are traditionally known to be great players of spin, who even gave the great Sharne Warne a harrowing time when the leggie was at his peak. Their reputation has however taken a severe beating following their struggles against spinners in recent times. Although their failings in Australia and England were incomprehensible yet still somewhat understandable since they traditionally aren’t great players of the moving ball, their underwhelming performance against spinners and that too in Indian conditions is so very difficult to digest. 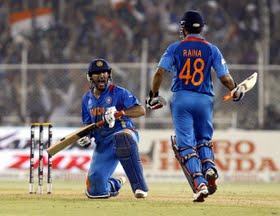 Tredwell’s match-turning spell against the Indians was the latest illustration of the fact that the home side’s batsmen aren’t comfortable facing spin as well now. In the game at Rajkot, India got off to a blistering start in reply to England’s massive target. They kept the pacers at bay, but for some strange reason couldn’t handle the spin of Tredwell, who was very good but by no means threatening. The more worrying aspect was that all the batsmen Tredwell got out were well set. As such, they should have found it easier to deal with the English spinner, but instead fell to him one after the other.

A look at Tredwell’s dismissal gives an insight into how India threw away a match they could have won. Ajinkya Rahane (47) was the only batsmen among Tredwell’s victims who fell short of a half-century. Gautam Gambhir made a run-a-ball 52 before falling to the impressive spinner. Tredwell’s third wicket, Yuvraj Singh, was looking good on an aggressive 61 when he was dismissed. The last of the dismissals was the most disappointing of all. Having reached his 50, Suresh Raina half-mindedly held his bat out at a delivery and handed the simplest of return catches to Tredwell. If only one of those batsmen had stayed till the end, the result of the game could have been different.

Following the disasters in England and Australia, a few Indian players defended their shambolic performance stating ‘let teams like England and Australia perform on spinning pitches in India’. Well, England have certainly done, and there is no reason, considering India’s present woes, why even Australia can’t do the same. The whole spinning pitches phenomenon came to the fore during the England Test series, when M S Dhoni out of nowhere began asking for rank turners. And while the move backfired in the series, its repercussions are being felt even now.

After the poor performance against England spinners in the Test, India failed to keep the Pakistan spinners at bay even in one-dayers where there isn’t much assistance for them. And from what has been on display at Rajkot they seem to have lost complete faith in their batting ability against spinners. What else can explain their failures against Ajmal, Tredwell and even Hafeez, who is more of a containing spinner? Indian batsmen will now have to prove their worth against spinners all over again.