Indian pacer Bhuvneshwar Kumar, who has been ruled out of the West Indies ODIs due to sportsman’s hernia, is likely to miss the tour of New Zealand as well in January

Indian pacer Bhuvneshwar Kumar, who has been ruled out of the West Indies ODIs due to sportsman’s hernia, is likely to miss the tour of New Zealand as well in January, according to reports. As per a Times of India report, Bhuvneshwar will miss the entire New Zealand tour and won’t be fit before the Indian Premier League 2020.

Earlier, Bhuvneshwar had recovered from an adductor strain and featured in the Syed Mushtaq Ali Trophy. However, he complained of pain in his right groin following the third T20I against West Indies in Mumbai on Sunday. He underwent a scan after which it was revealed that his sportsman’s hernia symptoms had resurfaced.

"Bhuvneshwar complained of pain in his right groin after the final T20I in Mumbai on Wednesday. He underwent an ultrasound scan conducted by a specialist and the BCCI medical team found that his sportsman's hernia symptoms have resurfaced. A specialist opinion will now be sought, and his management plan will be decided accordingly,” a Board of Control for Cricket in India (BCCI) released informed. 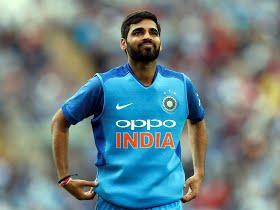 The BCCI then named Shardul Thakur as a replacement for Bhuvneshwar for the upcoming ODI series against the Windies starting on December 15. Thakur has played five ODIs for India and has six wickets to his name at an average of 36.33.

Meanwhile, a source told TOI, “He (Bhuvi) will certainly miss the entire tour of New Zealand. Probably should be in a position to return to cricket only during the IPL, if all goes well. He’ll have to go through one. That’s confirmed. The how, when and where is being worked out.”

The source added to TOI that this is not a one-off case, and players like Wriddhiman Saha have earlier suffered due to the alleged inefficiency of NCA. “It’s is not the first time that a cricketer carrying an injury has gone through something like this at the NCA. We all remember the Wriddhiman Saha episode, don’t we? His career was put in jeopardy, the way his recovery was handled. What’s happening in Bhuvneshwar’s case is troubling,” the source further stated.