Pollard ton in vain as Australia go 4-0 up

Australia inched towards a cleansweep of 5-0 after defeating West Indies by 5 wickets in the Fourth ODI at the Sydney Cricket Ground. The match was already Australia’s after the Windies were reduced to a disastrous 98 for 7.

Australia inched towards a cleansweep of 5-0 after defeating West Indies by 5 wickets in the Fourth ODI at the Sydney Cricket Ground. The match was already Australia’s after the Windies were reduced to a disastrous 98 for 7. However, a determined Kieron Pollard came up with a superb 3rd ODI Century to rescue the West Indies big time.

The visitors were rocked back by three early wickets from Mitchell Johnson – Johnson Charles (bowled for a duck by a full length inswinger), Kieran Powell (caught at covers off a leading edge) and Darren Bravo (fending off a nasty lifter to slips). West Indies struggled to get going after this with wickets falling and the runs just not coming at all. 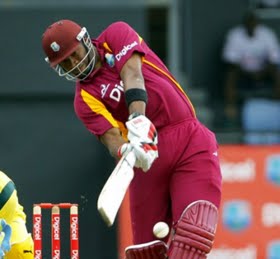 In the 11th over, Dwayne Bravo was adjudged lbw to Maxwell’s off break, followed up by Ben Cutting taking three wickets – Deonarine, Devon Thomas and Skipper Darren Sammy, all caught in the slips. Just when the Aussies thought that the game was over, they found out that the West Indies had decent batting right till no.11 to support Kieron Pollard who went ballistic after getting his eye in.

Australia suffered quite a lot because of bowling out the quotas of Mitchell Johnson and Glenn Maxwell early. The support bowlers weren’t that penetrative with the exception of Cutting. Pollard took advantage of that to score 109* (from 136 balls with 11 fours and 2 sixes). Andre Russell with 18, Sunil Narine with 23 chipped in to help Pollard lift West Indies to 220 before they were bowled out in the final over.

The hosts didn’t have any issues in their run chase though Tino Best produced one of the fastest bowling spells in the history of the game, often clocking around 151 kmph. Shane Watson had all the time in the world to face him though and a couple of solid partnerships right at the top sealed the match for Australia. Watson smashed his way to 76 from 84 balls (with 9 fours) before he was forced to glove a nasty short ball from Tino Best to the keeper. The Australians lost two more wickets but easily got to the target with 41 balls to spare. Pollard got the Man of the Match for his heroic century that went in vain.