Australia went into the match against South Africa high on confidence having outdone hosts with ease in their first game of the series. On the other hand, the Proteas were stunned by West Indies, and had a tough challenge on their hands.

Australia went into the match against South Africa high on confidence having outdone hosts with ease in their first game of the series. On the other hand, the Proteas were stunned by West Indies, and had a tough challenge on their hands. Having put up just 189 on the board batting first, another defeat seemed in the offing. However, the South African bowlers put up an inspired effort to outdo the Aussies. Yes, the pitch at Guyana remained a tough one to bat on. But, South Africa still needed to bowl out of their skins to defend a low score, which they did rather commendably. As for the Aussie batsmen, they were clearly caught off guard by the Proteas bowling.

What South Africa did excellently in the chase was to keep Australia under the pump right from the start, and never allowed the pressure to release. Almost all the bowlers chipped in with significant contributions to make a difference. Wayne Parnell, who has been constantly in and out of the side, got the big wickets of the in-form David Warner and opposition skipper Steven Smith, both cheaply. Kagiso Rabada stood out with figures of 3 for 13 in his seven overs, Usman Khawaja and Matthew Wade being among his victims. The opening bowlers put South Africa on top making the task easier for the spinners

.The slow bowlers for the Proteas also did not disappoint. Imran Tahir got another big wicket of Mitchell Marsh before the dangerous all-rounder could get his eye in, to finish with 2 for 39. Aaron Phangiso also chipped in with a couple, including the one of Aaron Finch, who was the only one showed defiance when Australia batted. He also picked up the last wicket of Nathan Lyon, who delayed the inevitable, and frustrated the South African bowlers with his valiant 30. Debutant Tabraiz Shamsi had the perfect start as he got a wicket in his first over although he was lucky to get the scalp of the struggling Glenn Maxwell.

Australia struggled because, they never managed to get going. Chasing a score under 200, they only needed a couple of decent partnerships to get home. But, the fact that they fell way short of the target in spite two batsmen Finch (72) and Lyon (30) contributing 102 runs of their own, is a clear demonstration of how poor the others were. The loss is perhaps an eye opener of the fact that they are becoming increasingly dependent on Warner to win them games. Of course, Smith will be focused to throw that theory out of the window. But, the lack of runs from Maxwell is now becoming a big concern. Marsh and Wade also need to begin being more consistent. 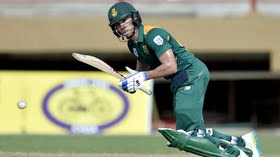 Although South Africa's bowlers bailed them out of a tricky situation, the contribution of Farhaan Behardien was significant with the bat. When he came into bat, the team was in all kinds of trouble. But, Behardein assessed the situation well, and instead of going for the big strokes, applied himself. His sedate half-century meant South Africa had a fighting total on the board, and the bowlers did the rest. In spite of the win, South Africa should be disappointed with their batting effort. Hashim Amla, Quinton de Kock, skipper AB de Villiers and JP Duminy failed for the second game in a row. They will need to pull up their socks.