Rahul Dravid praises Hardik Pandya for playing according to situation

India legend Rahul Dravid on Tuesday praised all-rounder Hardik Pandya for playing as per the demands of the situation in the One-day International (ODI) series against Australia.

India legend Rahul Dravid on Tuesday praised all-rounder Hardik Pandya for playing as per the demands of the situation in the One-day International (ODI) series against Australia. Reiterating his comment.

"A good example about Hardik from my perspective is, he's willing to play situations and not just the natural game we often speak about. Credit goes completely to him. It's not about playing just the one way you want to play," Dravid was quoted as in an NDTV report. 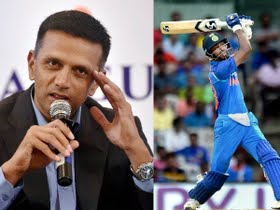 Pandya has scored two half-centuries in three matches so far. In the first ODI, he made 83, and in the third ODI 78, after being promoted up the order. "If he bats at four, he bats in a particular way. If he bats at six, he bats in a particular way. Tomorrow, he may bat at 80 for 4, like he did in the first ODI with Dhoni. That shows maturity and that's what you want to see,” he said.

"This concept of 'play your natural game', which I hear all the time, frustrates me because there's no such thing in my belief as 'natural game.' It's only about how you play different situations," Dravid explained.