Devastated but also giving thanks for my performance: Brathwaite

West Indies all-rounder Carlos Brathwaite, on Saturday, said that while he was disappointed with the fact that his team lost a close match

to New Zealand despite his terrific, he will take confidence from his performance into the remaining games.

Brathwaite slammed 101 from 82 balls to rescue his team after they had slipped to 245 for 9 at Manchester. The burly batsman hit five sixes and nine fours but was dismissed by Jimmy Neesham in the penultimate over as Trent Boult took a good catch on the boundary under pressure.

"Obviously bittersweet. For me personally, for my confidence. As a result of all the hard work I've been putting in it's finally good that it comes to fruition," the Windies all-rounder said after the game.

"Obviously devastated not to get over the line, but also giving thanks for the performance. Even getting the team into the position we got into before I got out," added Brathwaite. 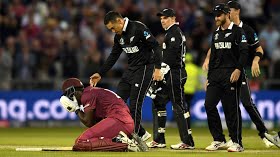 Despite Chris Gayle's 87 and Shimron Hetmyer made 54, West Indies soon crumbled to 164 for 7 before Brathwaite got them back into the game. He featured in a last-wicket stand of 41 with Oshane Thomas, who finished on zero.

Brathwaite also had kind words for the Kiwis as skipper Kane Williamson consoled him after he sank to his knees after getting out. The New Zealanders are some of the best people in the world. Fortunate to have shared a dressing room or play against and socialize with them in franchise tournaments. Good friends with a few of them," the West Indian further said.