Birmingham Test: England won most of the big moments

For two days, Pakistan dominated the Birmingham Test, but England fought back rather impressively to nudge ahead in the end, and claim an enviable 2-1 lead in the series. While England were not dominant in the Test

For two days, Pakistan dominated the Birmingham Test, but England fought back rather impressively to nudge ahead in the end, and claim an enviable 2-1 lead in the series. While England were not dominant in the Test, what they did very well was to make sure that they hung in there, and not allow Pakistan to run away with the game. And, once they got into the driver's seat, they made sure that they stayed there, unlike Pakistan, who failed to capitalise when they were in the ascendancy. England's tenacity and Pakistan's incapability made the big difference in the end.

While there were many turning points, the partnership between Moeen Ali and Jonny Bairstow on the penultimate day went a long way in deciding the fate of the match. Ali was under definite pressure following his poor showing with the bat at Lord's to go with the not so impressive bowling show at Old Trafford. But, he raised his game really well to notch up half-centuries in both innings. To go with it, he also picked up some important wickets. It was the kind of performance Moeen needed to reassure himself of his place in the team. As for Bairstow, he gave another reaffirmation of his growing worth as a dangerous wicket-keeper bat.

England's bowling effort on day three was also instrumental in pushing them towards victory. At the start of the day's play, Pakistan very much were ahead, but England's bowlers came back with vengeance. James Anderson, Stuart Broad and Chris Woakes all combined to keep Pakistan on their toes. Although the visitors still managed to get a lead of 100, it wasn't a big enough deficit for them to worry a lot. In fact, England's all-round success as a bowling unit was a key takeaway from this game, exemplified by the fact that all five main bowlers, including Steven Finn and Moeen claimed two wickets each on the last day. 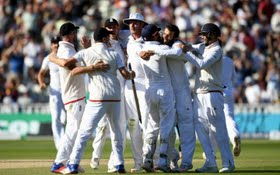 England's second-innings opening stand was another massive juncture in the game. The hosts went in with a three-figure deficit, but Alex Hales and skipper Alastair Cook singlehandedly took them past that score to put them in the lead. Although, Pakistan fought back to put the game in the balance, that period of dominance, followed by the other in which Moeen and Bairstow excelled put them firmly in the driver's seat. And, once they got into the lead, the pressure was always going to be on Pakistan, as things eventually turned out to be.

While England were successful in claiming the lead, the struggles for some of their players continued. James Vince got a couple of more middling scores, leaving his Test spot in jeopardy. Further, Hales did manage a fifty, but he hardly looked in control. Gary Ballance got a 70 in the first innings, but his place too is not completely secure as yet. In the bowling, Steven Finn is struggling to get back to his best. So, England do have some work to do going into the final Test.