BH vs CSK: Brisbane’s woes against spin cost them dearly

In T20 cricket, the type of bowling, whether it is pace or spin isn’t expected to make much of a difference

In T20 cricket, the type of bowling, whether it is pace or spin isn’t expected to make much of a difference. After all, 120 balls is all a team gets (minus the extras), and the primary aim of the batting side is to smack as many as deliveries as possible irrespective of the variety of bowling on offer. Chennai Super Kings, however, reiterated during their clash against Brisbane Heat at Ranchi on Saturday that there is a place for quality bowling even in this format of the game, which is heavily loaded in favour of the batsmen. 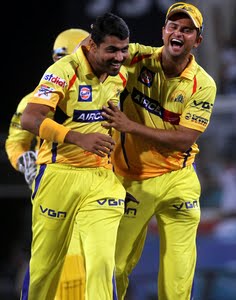 The reason for Brisbane’s loss against Chennai was pretty simple, their inability to stand up against the high-class Chennai spin attack. Agreed, they got off to an insipid start batting first, but teams have recovered from bad positions in the past. There was hope for Brisbane even in this game – Hopes to be precise, James Hopes. The skipper-cum-opener stroked a few impressive fours to give his side some confidence, and Chris Lynn also made a mark by finding the gaps at will. Their biggest test though was to come against spin, and they failed miserably on that front.

Chennai were aided by the fact that all their three spinners came up with substantial efforts. Ravichandran Ashwin was always expected to be the big threat against Brisbane’s batsmen and he came up with an extraordinarily performance. Ashwin may not be an exceptional spin bowler, but against teams that do not play slow bowling well, he can be quite a handful. Brisbane’s batsmen had no idea how to deal with his variations, and even though he ended up with only a solitary wicket against his name, he hardly conceded a run. Thanks to Ashwin’s brilliant spell, the Brisbane innings got stuck.

MS Dhoni’s bowlers were brilliant in the sense that they attacked from all corners. Ravindra Jadeja had a few poor games going into this match, but Brisbane’s weaknesses against spin helped him to play himself into some kind of form. The couple of wickets he picked up only derailed Brisbane’s innings further, but also gave Jadeja the kind of confidence he needed going into the semis. Dhoni has a lot of confidence in Suresh Raina as a bowler, and the part-timer yet again stood up to the challenge, chipping in with a wicket while restricting the runs.

It would be difficult for one to be too critical off Brisbane’s bowling. For one, they were defending a low total and, secondly, they do not have the kind of talent in the bowling department that Chennai have. It thus wasn’t surprising that not a single bowler from Brisbane’s side made any sort of impression in the match. The ease with which Chennai chased down the target demonstrated the wide gulf between the two teams. Michael Hussey’s half-century was as assured a T20 knock as one could see, and Murali Vijay’s return to form after a string of ducks would have pleased Chennai ahead of the knockouts. Yet, again, Dhoni’s men look set to go the distance.