When the Test series between Bangladesh and New Zealand began, there were no two doubts that the former side was going to struggle. But, Bangladesh raised hopes of a shock upset following a record partnership between Shakib Al Hasan and Mushfiqur Rahim in the first Test.

When the Test series between Bangladesh and New Zealand began, there were no two doubts that the former side was going to struggle. But, Bangladesh raised hopes of a shock upset following a record partnership between Shakib Al Hasan and Mushfiqur Rahim in the first Test. However, they crumbled inexplicably after that, in such disastrous fashion that New Zealand won the Test with ease. While Bangladesh would have been disappointed with the eventual outcome, they would have been pleased that they managed to put up a fight at least. And, heading to the second Test in Christchurch, they would have hoped for an improved show. But, it was déjà vu of sorts as Bangladesh again crumbled after putting up an early fight.

The manner in which Bangladesh collapsed in the second innings of both Tests was a clear indication of the fact that they do not yet possess the appetite for the longer version of the game. The downfall at Christchurch in particular was unacceptable. The entire third day of play was washed out due to rain. And when play resumed on Monday, the match was still in the balance. But, Bangladesh lost it completely, and rather inexplicably. The fact that they lost the match wasn't surprising, but it was the manner in which they did that hugely disappointing. It is not as if this team does not possess quality players. But, despite the experience, they have somehow failed to put things together.

Bangladesh's batting effort on Monday can be at best described as reckless. While the need of the hour was to build partnerships, one after the other, batsmen came in and perished trying to play the big strokes, thus handing the match to the Kiwis on a platter. With Rahim out injured, the visitors would have wanted stand-in skipper Tamim Iqbal to lift his game. But, he had a highly disappointing match. In the second innings in particular most of the batsmen were guilty of poor strokeplay. From Mahmudullah to Shakib and Sabbir Rahman, they all perished even as the team wanted them to stay on. Not surprisingly, the youngsters followed suit. In fact, apart from Soumya Sarkar's first-innings 86, their batting was a let down.

While there was nothing spectacular about New Zealand's victory, they would be relieved that they managed to close off the game. In both the Tests, there were moments when it seemed Bangladesh were nudging ahead. However, New Zealand were successful in coming back into the game rather swiftly. In hindsight, the Kiwis' lead of 65 proved to be rather significant. There were some rather impressive performances from the batsmen. Henry Nicholls stood out with his 98, and was unlucky not to have struck a ton. But, he did well to guide the tail along, featuring in handy partnerships with Tim Southee and Neil Wagner. Earlier, Tom Latham and Ross Taylor got impressive fifties as well. 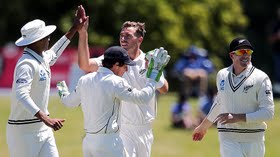 At the end of the day, it was New Zealand's incisive bowling that stood out as the difference between the two sides. Bangladesh also had New Zealand in trouble at times, but did not have the bowling to capitalise on it. In contrast, the Kiwis possessed the threat of Southee, Trent Boult and Neil Wagner, all of whom kept the Bangladesh batsmen on their hooks, and never allowed the pressure to lift. Southee and Boult yet again delivered the big blows, and it was their first innings effort that gave the Kiwis the upper hand. Wagner joined in the the fun in the second innings, and de Grandhomme was left to enjoy himself with the bat in the end.