Despite the loss, Kohli says just one spot to discuss

In spite of the shocking loss to Australia in the ODI and T20s, Indian skipper Virat Kohli has stated that India is more or less sorted for the World Cup 2019

In spite of the shocking loss to Australia in the ODI and T20s, Indian skipper Virat Kohli has stated that India is more or less sorted for the World Cup 2019 except one position. After losing the T20s 2-0, India conceded the ODIs as well after a 2-0 lead.

"We are sorted with our combination. We know our playing XI going into the World Cup. There will be just one change based on condition. When Hardik Pandya will come back, he gives depth in batting and opens up options in bowling. We know where we are going. We are clear about our playing XI," Kohli said at the post-match press conference. 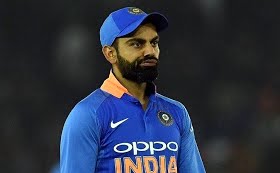 Even as there are question marks about the no.4 slot as well as confusion about the second wicket-keeper slot, Kohli maintains that there's only one spot to be zeroed in on.

"We are more or less sorted. Now, it's about giving guys their roles and expect them to stand up. We are not at all confused. Maybe there's just one spot we've to discuss," he added.

Kohli admitted that experimenting cannot be used as an excuse for losing the series. "Last three games, the idea was to give fringe guys some time and see how they react. No excuses, we're expected to raise our standard of cricket. The changes will never be an excuse. We will take a lot of confidence going into the World Cup," the skipper added.