Rookie fast bowler Navdeep Saini made a stunning debut with figures of 3 for 17 as India beat West Indies by four wickets in a low-scoring game in the first T20 at the Central Broward Stadium in Florida yesterday.

On a tough surface for batting, West Indies batted first but managed only 95 for nine. In response, India also found the going extremely tough as scraped through to victory, reaching 98 for 6, with 16 balls to spare.

Saina was part of the India A team in the Caribbean and continued his success with the senior team as well, finishing with 3 for 17 from his four overs. For West Indies, Kieron Pollard top-scored with 49 and was also the highest scorer in the game. 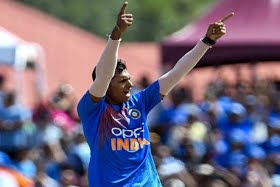 Speaking in praise of the newcomer, Indian skipper Virat Kohli said, "Navdeep is a rarity with his raw pace. We can only hope he kicks on from there. It wasn't the best pitch because of all the weather around. Everyone did a great job to get the match underway on time."

Bhuvneshwar also claimed two wickets as India put up a highly proficient effort with the bat. India though was equally poor with the bat. Shikhar Dhawan, in his first match since the early exit from World Cup due to injury, was out cheaply. Rohit Sharma top-scored with 24.

Kohli and Manish Pandey made 19 each as India managed to overcome the target recovering from 32 for 3. On the defeat, West Indies captain Carlos Brathwaite said, "Once again I don't think we assessed the conditions properly.

"We just have to keep on playing positively though and come at them hard for the second match to keep the series alive," he added.

The second match will be held at the same venue on Sunday.