Cheteshwar Pujara proved he is hungry for runs

It is not easy to replace Rahul Dravid. It wouldn’t be wrong if we go to the extent of saying that it is impossible. However, in the few Tests that Cheteshwar Pujara has represented India, he has proved that he is the best choice to take over from Dravid at the number three position.

It is not easy to replace Rahul Dravid. It wouldn’t be wrong if we go to the extent of saying that it is impossible. However, in the few Tests that Cheteshwar Pujara has represented India, he has proved that he is the best choice to take over from Dravid at the number three position. His double hundred at Motera in Ahmedabad, scored in Dravidesque fashion, was nothing but a perfect assertion of the same. Pujara batted like a thorough professional, a performance belying a man who is only playing in his sixth Test.

Many cricket pundits believed that Pujara should have been in the Indian team a lot earlier. They had a valid point. After all, Pujara had scored runs in gallons right from his very early days in cricket. He was the top scorer for India in the 2006 U-19 World Cup, scored a triple hundred at the U-14 level against Baroda and also went on to score a double hundred against the England U­-19 squad. 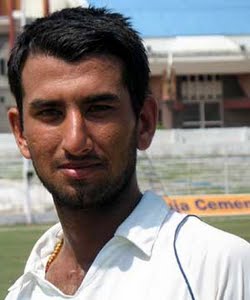 Pujara continued his run-making spree at the Ranji Trophy level as well, raking up a triple century against Orissa in the 2008-09 season, a knock which accentuated calls to include him in the Indian Test squad right away. To be fair to the selectors, it would have been difficult for them to displace Dravid right away considering he had been such a great player for the team for years, and also consideringthat it was around the time Dravid was returningto form with some tough knocks. What the delay, however, did was made Pujara hungry for more runs, and when he eventually got the opportunity to make his Test debut, against Australia in Bangalore in 2010, he proved that he belonged to the top level. Pujara’s knock in the fourth innings not only set up an Indian victory, but also reiterated that, in Pujara, India have a man for the future.

When a batsman gets his much-deserved opportunity after a long toil, he either transforms his hunger into big runs or fails in trying to do too hard. The case has clearly been the former for Pujara. Both in the series against New Zealand, and in the Test against England at Motera so far, he has made it clear that all he wants to do is score runs and more runs. The fact that he did not throw his wicket away even after scoring a century was reaffirmation that Pujara likes the grind of Test cricket. He did not lose concentration even after crossing 200, which is a great sign for Indian cricket.

It is too early to conclude that India have found a suitable replacement for Dravid in Pujara just as yet. After all, the 24-year-old’s Test career is only six matches old, and he is yet to be tested in alien conditions. All his big runs have come in Indian conditions so far. To be recognised as an all-round cricketer, Pujara will have to score big runs away from home as well. For the moment though, India should be exceedingly pleased in the manner in which Pujara has applied himself to the task.