Lanka have the capability to do better in ODIs

Having been thrashed in the Tests 3-0, Sri Lanka would be a disheartened outfit no doubt. They came to Australia viewing this as their best chance to upset the Aussies, who aren’t as strong as they were a few years ago, an aspect which the South Africans exploited en route to asserting their number one status.

Having been thrashed in the Tests 3-0, Sri Lanka would be a disheartened outfit no doubt. They came to Australia viewing this as their best chance to upset the Aussies, who aren’t as strong as they were a few years ago, an aspect which the South Africans exploited en route to asserting their number one status. However, all their experienced batsmen failed to rise to the task even against a relatively weaker Australian outfit. Even going to the ODIs, they have been dealt a major blow, losing Kumar Sangakkara to injury midway through the Test series. Still, the Lankans should believe that they can do a lot better in the one-dayers since they have players who possess excellent skills for the format being discussed. 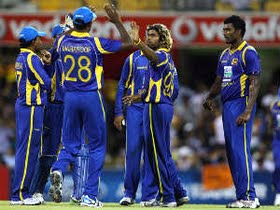 Mahela Jayawardene would again be expected to lead from the front, but he will need a good amount of support from his experienced teammates as well as the one-day specialists in the side. Tillakaratne Dilshan managed only one score of significance in the Tests, but he is a much more dangerous player in the shorter format. If he gets Lanka off to a flying start, that would automatically put the Lankans in a decent position in the match. Considering his experience, the team would be looking forward to some good performances from him, especially considering how dangerous he can be when in full flow.

The series will also be a big tester for Angelo Mathews, who is likely to take over the charge of captaincy when Mahela Jayawardene steps down at the end of the Australian tour. Mathews had a tough Test series with both the bat and ball, but he is considered a strong character, and will be confident of leaving his mark in Australia. Looking at the other batsmen, Dinesh Chandimal has proved to be a promising batsman whenever he has batted in the top or middle order. The Aussies willhowever test him without doubt. Will Chandimal’s aptitude come to the fore in alien conditions?

Among the one-day specialists, Sri Lanka would be banking heavily on Thisara Perera, who is an extraordinarily strong hitter of the cricket ball. In addition, his medium pace bowling should also come in handy in conditions where the ball moves around quite a bit. Furthermore, they also have in their ranks Upul Tharanga, who has turned himself from an opening batsman in both formats to a specialist lower-order hitter in one-dayers. Last but not the least, there is Lahiru Thirimanne, who made an impressive 91 at Sydney.

As always, Lasith Malinga, if fit, would be leading the Lankan attack. The Australian batting in the opening two games will be slightly on the weaker side considering they have rested both David Warner and Michael Clarke. The must look to exploit this aspect of Australia’s batting to the hilt. Malinga apart, one-time mystery spinner Ajantha Mendis would also play a crucial role. Does he still have the capability to bamboozle batsmen? All said and done, Lanka have a better chance of doing well in the ODIs.