New Zealand are six wickets away from defeating Sri Lanka in the Second and Final Test at the P Sara Oval in Colombo. Needing 363 to win, Sri Lanka slipped to a disastrous 47 for 4 inside 16 overs before stumps on Day 4.

New Zealand are six wickets away from defeating Sri Lanka in the Second and Final Test at the P Sara Oval in Colombo. Needing 363 to win, Sri Lanka slipped to a disastrous 47 for 4 inside 16 overs before stumps on Day 4. Tim Southee and Doug Bracewell took a couple of wickets each on a pitch that was conducive to new ball bowlers.

It was a hectic fourth day’s play that saw as many as 17 wickets go down. First New Zealand polished the Sri Lankan first innings, taking the remaining four wickets in a hurry with the second new ball. Thilan Samaraweera could add only two runs to his overnight score of 76 before he was caught at second slip. Tim Southee picked up 5 for 62 and Trent Boult chipped in with 4 for 42 to help the Kiwis take a sizeable first innings lead of 168 runs. The hosts for the record were bowled out for 244, losing four wickets this morning adding only 19 runs. 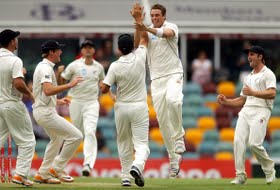 New Zealand in their second innings were pegged back with wickets at regular intervals. Sri Lanka bounced back in the game reducing the visitors to 75 for 5. But a crucial partnership of 97 between Skipper Ross Taylor (74 from 95 balls with 2 fours) and debutant Todd Astle (35 from 100 balls) consolidated the lead nicely. The only worry for the Kiwis was that their run rate was just too slow. New Zealand had another collapse from 172 for 5 to 182 for 9 and at the right time, Taylor declared the innings in the final session with an overall lead of 362 runs.

Chasing an achievable target of 363, SL lost Tharanga Paranavitana lbw to the first ball of the innings to Southee. The same bowler had Dilshan edging a big drive to the keeper. Sri Lanka were rocked further by Doug Bracewell who sent back Kumar Sangakkara and Skipper Mahela Jayawardene. While Sangakkara was bowled round his legs to an innocuous short of length delivery that rolled off his pad, Mahela was caught behind, forced to nick a rising delivery that seamed away.

By Stumps, Sri Lanka got to 47 for 4 in 15.4 overs with bad light halting play with just a few minutes left. At the crease for Sri Lanka are Thilan Samaraweera and Angelo Mathews to battle it out tomorrow morning.

Win with the best odds for online cricket betting in India at PureWin. Discover the greatest variety of cricket events and s markets available in India today with superb cricket betting odds on all imaginable cricket events and tournaments from every part of the world.
Roulette is one of the original table games at any casino. Now with technology, India's most popular roulette game takes the fun to you, allowing you to play whenever and wherever you are.
Play live casino games at 10Cric and enjoy HD quality live casino games with real live dealers from all around the world. Gamble on popular games such as roulette and blackjack, streamed directly on your phone!