An all-Asian clash in first semi-final

The two Asian sides that have made it to the semi-finals, and will clash in the first of the two semis on Thursday, thoroughly deservetheir respective spots. Pakistan, who were under extreme pressure following the disappointing loss to India, bounced back brilliantly against Australia.

The two Asian sides that have made it to the semi-finals, and will clash in the first of the two semis on Thursday, thoroughly deservetheir respective spots. Pakistan, who were under extreme pressure following the disappointing loss to India, bounced back brilliantly against Australia. Unlike India, they did not know how well they needed to perform to outdo their arch rivals in the battle for the semis. Wisely, they concentrated on putting in their best effort, and did well enough to qualify. Sri Lanka, on the other hand, had a close game against New Zealand, winning only in the Super Eights, but got the better of England and West Indies handsomely. 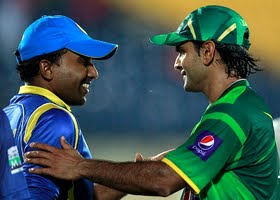 Mohamamd Hafeez used brilliant tactics against Australia, giving them only spin to tackle for the first 17 overs. It worked exceptionally well against the Aussies, who had no answer to Hafeez’s smart move. Even the in-form Shane Watson struggled, proving conditions play a big role in this part of the world when it comesto competing with non-Asian sides. Having said that, Hafeez will definitely need to have a different plan against Sri Lanka, since the hosts are much better players of spin as compared to Australia. A lot would be expected of Hafeez, Raza Hasan and Saeed Ajmal again considering their current form, but with their impact expected to be limited, the performance of the seamers would become all that more crucial. Umar Gul would thus be expected to provide the side with crucial breakthroughs.

Batting is one area where Pakistan are on the weaker side. Hafeez has looked on and off alternately while Imran Nazir has batted with confidence without transforming the same into runs consistently. The only man who has really held the Pakistan innings together has been Nasir Jamshed. In almost every game, including the crucial one against Australia, he has been the one who has dominated opponents, literally. Jamshed apart, however, the middle-order comprising of Kamran Akmal, Shoaib Malik and Umar Akmal would also have to come good. One area of concern for Pakistan will be the form of Shahid Afridi. It isn’t surprising that he done nothing with the bat, but his incisive zing in the bowling has been missing. Pakistan would like it back for the big game.

Following the smart move of getting Kumar Sangakkara to lead in the last game, Mahela Jayawardene should step back in as leader for the semi-final. Apart from being hosts, Sri Lanka also possess one of the strongest batting line-ups in the tournament. It remains to be seen when Tillakaratne Dilshan, Mahela Jayawardene as well as Kumar Sangakkara would be tested by the quality Pakistan spinners. The two all-rounders in the side -- Angelo Mathews and Thisara Perera – haven’t to do much. Wonder whether that will change in clash against Pakistan

Two men who could have a significant impact on the match are Lasith Malinga and Ajantha Mendis. The former was sensational against England, and he seems to be hitting peak at the right time. Mendis, on the other hand, has had mixed luck so far, and would be keen toprove a point against Pakistan. Neither side holds any advantage going into the big clash. The better side on the day should emerge triumphant then.